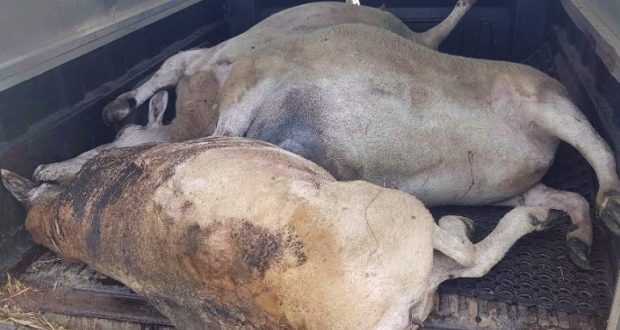 At least three sheep died in the attack.

Police believe sheep were killed deliberately in attack on farm

Three sheep were killed and eight are missing after an attack on a Surfleet Marsh farm.

Lincolnshire Police say they’re investigating a report of animal cruelty after the incident which took place between Friday and Saturday night.

Police believe a vehicle, possibly a 4×4, entered a field and ran over three of the resident sheep.

One sheep died as a result of the collision. One of the other two injured sheep was set on fire while it was still alive.

This sheep, along with the other injured sheep had to be put to sleep.

Investigating Wildlife Crime officer PC Martin Green said: “This is a horrific incident that has caused much upset to the farmer.

“Unfortunately, we do believe this was a deliberate act and we are carrying out investigations to bring the offenders to justice.

“We believe a 4×4 was driven into the field where the sheep were kept sometime between Friday and Saturday.

“Three of the flock were knocked down and have sadly died.

“We would like to hear from anyone who may be able to assist with our investigation.”

Any information no matter how insignificant it may seem, may help us to investigate this cruel act and identify those responsible.”

A police spokesman said: “We would like to hear from any witnesses, anyone who may have seen anyone acting suspiciously in the area or anyone who has dashcam footage.”

There are a number of ways you can report

 By clicking on the email link force.control@lincs.pnn.police.uk- please remember to put the reference 168 of July 18 in the subject box.