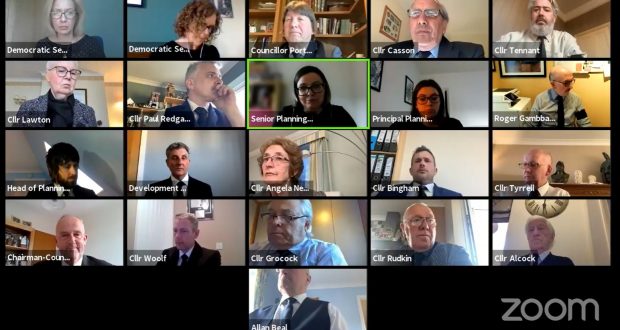 A still from the planning committee meeting.

Applications for two masts to bring 5G phone signal to Spalding have both been refused by councillors.

South Holland District Council’s Planning Committee had been recommended to refuse a 20 metre high pole and associated workings on the corner of Claudette Avenue and Wygate Park, but accept the 18m application at the Birch Grove and Matmore Gate junction.

Planning officers had felt the latter was far enough away from homes and could be screened by nearby trees, but at its meeting last night the Planning Committee voted to refuse it on the same grounds for the first application’s refusal, that the masts were an “unduly dominant, obtrusive and alien feature in the street scene”.

“On balance its considered concerns over the siting are over-riding (the benefits of installation),” planning officer Lucy Buttery said initially in relation to just the first application discussed.

Councillors called for the masts to be erected in industrial areas rather than residential and criticised applicant Hutchinson UK Ltd, which is part of the Three network, for not having a representative at the meeting to discuss the application.

Coun Paul Redgate said while discussing the first application: “Yes we’re a forward thinking council and yes to 5G for South Holland, but I think there’s a lack of information here and we’re talking about a technology company. We won’t be doing justice to our residents if we pass this.”

Speaking as a ward member against the application for the Birch Grove and Matmore Gate mast, Coun Lord Porter raised the issue of whether 5G would soon become obsolete.

“Given this is now a ‘billy-no-mates’ mast,” he said in reference to the other application having been refused, “It’s probably premature to grant it (the second mast).

“There should be some strategic layout across the whole of Spalding where these masts will work and they’ll be able to provide a full service.

“On the basis that we’re just about to have  super fast broadband rolled out on the existing infrastructure in South Holland, I’d perhaps say that 5G masts are now premature and becoming obsolete before they come in place and if we are going to have 5G coverage it needs to predominantly be covered by areas that won’t be covered by superfast broadband.”

Quoting The Jam’s song A Town Called Malice, committee chair Coun James Avery said: “The public gets what the public wants and very much the public do want 5G in terms of their connectivity, but there is a right location for these facilities. I agree there seems to be more questions than answers.”

The possibility of deferring a decision on the Birch Grove and Matmore Gate junction was raised but councillors were told because the masts are under 20m tall it would be allowed as permitted development under planning laws and that the matters were before them on the grounds of location.

As previously reported, a number of objections had been raised against both masts.