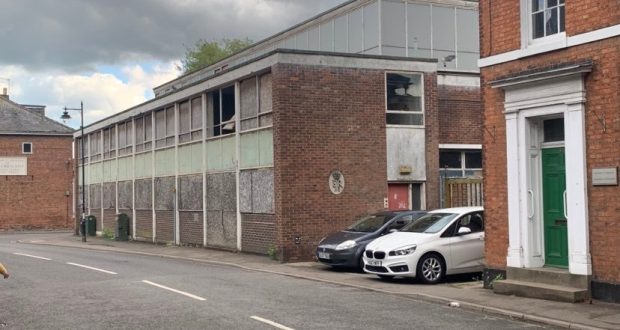 Planning approval has been granted to turn Spalding’s ‘hideous’ former sorting office into flats, but concerns have been expressed it won’t be delivered.

Some members of South Holland District Council’s Planning Committee said they’d rather the building on The Crescent be demolished and replaced with a new building.

But planners backed the bid to turn it into retail use on the ground floor with nine flats above.

Coun Christine Lawton called the building “hideous and horrible” and that not bulldozing it “could be a horrible mistake.

Coun Roger Gambba-Jones said: “The rush to grant anything is a great temptation when the proposal is to do something with a disused, abandoned building that’s so prominent and becomes an increasing eye-sore.

“It was an unpleasant looking building even when brand new. It had no intention of looking nice. It was there for a purpose.

“From my perspective I’d have liked someone to do a bit more with it. Get rid of many of the features, maybe keep the structure and framework but remove a lot of the facade and do something else with it.

“I do not look forward to seeing the continuation of the sorting office in a different guise.”

He continued “My biggest regret is the application is totally speculative. It’s a proposal with no end user and that has been put through with no prospect of actually being delivered, is my understanding.

“This is a full application that will be put out to the market that may or may not be delivered in the time of this application.

“Sadly if it were to be developed there’s every prospect it would be the very opposite of a coffee shop.

“If you’re a Spalding resident or anybody who is a regular of Spalding will probably have a very good idea it would be a shop, but not a coffee shop.

But Coun Peter Coupland told the meeting that it would cost any developer more to knock it down and said councillors should “encourage” the scheme.

Coun Rodney Grocock said: “It’s been an eyesore for the good people of Spalding for far too many years and I’m pleased it’s now being developed.

“I look forward to it no longer being a terrible thing to look at.

“It’s one of our terrible buildings and I’d like to remove it off our sights.

“I’m sure the people of Spalding will be delighted to get rid of the old broken windows and bits of cardboard on the street.

“It’s been vandalised loads of times so it will be good to get rid of that.”

Planning chair Coun James Avery added: “I quite like the nod to the sorting office. It looks shabby now and anything would have a positive aesthetic impact on this part of Spalding.”