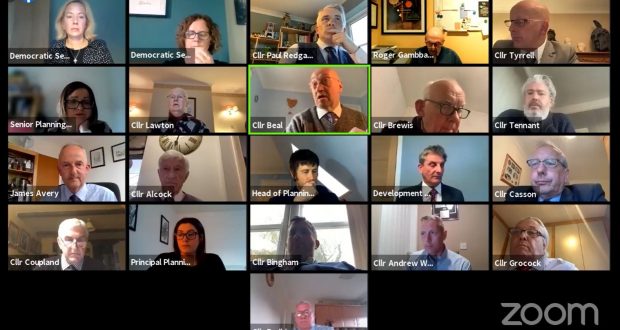 A still from the meeting.

A new village hall for Deeping St Nicholas is set to be built alongside 120 homes.

South Holland District Council’s Planning Committee granted outline permission for the site at Home Farm which has been subject to several successful applications for up to 135 homes in the past few years.

Building a village hall has previously been in some of the applications.

The latest plans includes the facility amid opposition to another proposed site for it, the application for which hasn’t been determined..

Coun Bryan Alcock told the committee: “Over a period of time they’ve lost every public meeting place in the settlement and this will provide a very important element of village life.”

“There is an active independent committee that has been formed and been raising money over the last two or three years, so there’s people behind it and waiting for it to happen.

“It’s such an important part of a settlement.”

Some opposition to the proposals was voiced particularly with the number of affordable homes being slashed to 11 instead of the 30 on the site.

Coun Andrew Tennant said: “The fact is 120 dwellings exceeds what was suggested for Deeping St Nicholas in the local plan even though some developments have already started there contributing towards that.

“The fact that this site wasn’t put forward in the local plan.

“Seems strang no-one’s raising questions that it’s outside the boundary and is a planning application in open countryside.”

But planning chair Coun James Avery said: “I feel there’s quite a healthy developer contribution even if the affordable homes are less than 25 per cent.”

Coun Andrew Woolf added: “When I first saw 120 homes in Deeping St Nicholas it put a shiver down my spine

“Normally there would be uproar if there were going to be so many homes in the area, but there were five representations with only three objections. That tells me the local people are not concerned about this.”