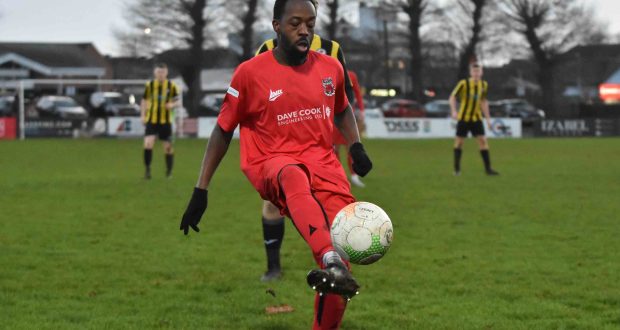 Lewis Thorogood has warned his Pinchbeck United team that they will have to play without fear if they are to get anything from their derby at Boston Town on Saturday.

The Knights, who are one place and two points clear of the Uhlsport UCL Premier Division North drop zone, are big underdogs for the trip to take on the fourth-placed Poachers at the Mortgages For You Stadium (3pm).

Boston won the reverse fixture 3-1 at the Sir Halley back in November, but Thorogood feels the result would have been different if Ben Robson hadn’t been sent off.

“Boston Town are a very good side,” admitted Thorogood. “They are very close-knit group and play with physicality and heart.

“Credit to them and boss Gary Edgley for what they’ve done this season.

“That being said, I do feel that 3-1 was a little harsh on us last time we played.

“It was a very close game and was in the balance before we had a man sent off.

“With 11 men, the result may have been a little different on the day.

“What we have to do now is go there and play without fear and put in a real shift if we want to come home with anything.

“I’m looking forward to the game, it should be a good one.”

Pinchbeck could have strikers Marcel Chipamaunga and Enoch Opayinka available to bolster their attacking options.

However, Opayinka – on dual forms from Spalding United – and the on-loan Chipamaunga aren’t with the Knights exclusively at this point.