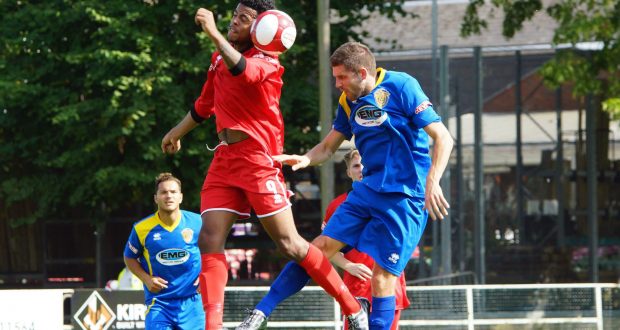 Neal Spafford is the standout name in a list of nine impressive Pinchbeck United signings.

The former Spalding United and Wisbech Town defender, who enjoyed a stint as caretaker manager with the Tulips last season before Gaby Zakuani took over, has agreed terms to play with the Knights in the ChromaSport UCL Premier Division North this season.

He will be reuinted with Pinchbeck boss Lewis Thorogood, who managed him during his stint at the SIr Halley Stewart Playing Field.

Thorogood said: “Spaff is a fantastic signing for us.

“He brings a wealth of experience at a higher level and I’m delighted to be back working with him.”

Also joining the Knights is highly-rated keeper Alex Smith, who was Michael Duggan’s understudy at Spalding.

Striker Harrison Holland is also signing, while last season’s skipper Dan Worthington is staying despite interest from elsewhere. Forward Scott Waumsley has also agreed to play for Thorogood’s new-look side, while the impressive Finlay Armond will remain at the Sir Halley too.

Thorogood added: “Smith joins having previously worked with me at Spalding United, superb goalkeeping talent and I looking forward to him having a successful season with us.

“Holland is a strong and direct forward with good attitude a welcome addition to our forward line.

“Worthington has the club at heart and wants to be successful and I’m excited that he shares the same vision and has vast experience at this level.

“Scott (Waumsley) has experience at this level and higher, talented, skillful, quick and direct. He will certainly be scoring goals for us this season.

“Finlay is a very talented midfielder who is going from strength to strength. This will be a big season for Fin and will complement his progression at Boston United.

“Nathan is a versatile and combative full back who can play either side and I’m really pleased to have someone with such energy in the ranks.

“Jake Is skillful, strong and a determined forward with an eye for goal and I am looking forward to him making his mark this season.

“I’m delighted to have Jack Fixter on board. He’s physical, no-nonsense, direct and knows what I’m looking for in a defender.

“I’m looking forward to helping him enjoy his football.”

On the field, Pinchbeck enjoyed a 2-1 victory over UCL Division One outfit Bourne Town at Knight Street on Saturday.

Enoch Opayinka and Harry Machin were on target for the Knights, who also had a fixture at Holwell Sports on Wednesday night called off due to COVID-19 concerns shared by both clubs.

They are due to visit Swaffham Town on Saturday, however.

Meanwhile, Pincbeck have landed home draws in both this season’s FA Cup and FA Vase competitions.

Thorogood’s Knights will play host to UCL Premier Division North rivals Skegness Town in the extra preliminary round of the FA Cup on Saturday, August 7.

The victors will visit either Anstey Nomads or Sleaford Town in the preliminary round on Saturday, August 21.

Pinchbeck will also host Derbyshire-based side Graham St Prims in the second qualifying round of the FA Vase on Saturday, September 25.