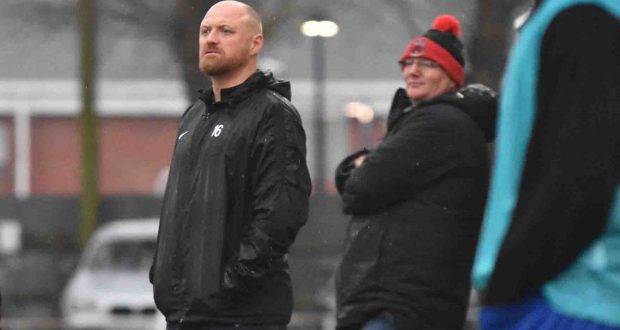 Ian Dunn isn’t thinking much about football at the moment – but he reckons the enforced break will be good for stress levels.

After years of success that saw the player/boss take the Knights from the Peterborough League to fourth place in the UCL Premier Division last season, 2019/20 was a shock to the system.

Before the season was declared null and void, Pinchbeck were staring down the barrel at relegation.

Dunn concedes that he needs some time away from football, but now feels the break caused by the coronavirus crisis will give him the time he needs.

“I’ve been feeling like I need time out,” admitted the player/boss. “It’s fair to say I wasn’t sure about next season and my future.

“In a strange way, this awful situation will give me plenty of time to re-energise away from football.

“I’ll just be focused on my family and taking care of them. Maybe I’ll walk the dog at 3pm instead.

“Even though there’s a lot going on, I already feel a lot more chilled out.

“I’m not thinking about relegation or having to resign or anything like that, life feels much more simple – if that makes sense.

“We started this season late and never really caught up. Our results have obviously not been good enough, but we’re one of the teams who benefits from this situation.

“Next season, whenever that will be, might be more of the same but things will be very different for every team.

“I’m going to enjoy not having football around for a bit and hopefully be able to enjoy it again when it does come back.”