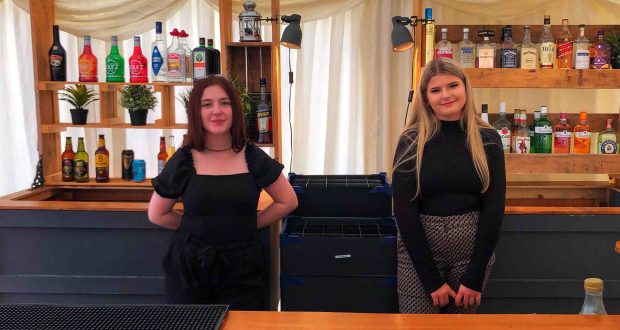 How does a pint and the chance to play a traditional pub game sound?

Families are being encouraged to support the move by enjoying time in a friendly atmosphere.

The licensed bar will have beers, lagers and ciders as well as soft drinks and for those that want to try their hand at a game there will be shove ha’penny (complete with real ha’pennies!), table skittles, bar skittles, darts and dominoes.

The venture is by Tilly’s Garden Party Hire, a family-owned firm in West Pinchbeck run by couple Nick and Karen Stockdale.

It’s a marquee, furniture and bar business which has supplied the National Trust and pop star Ellie Goulding’s wedding.

Nick has recently become chairman of the village hall committee and saw an opportunity to bolster community spirit and hopefully raise some funds for the asset.

He said: “Like most church halls, it’s not been used much but we’ve begun marketing and increasing the hirers.

“In addition to this, we’ve planned a number of community focussed events such as a Halloween evening and a very popular quiz night.

“My day job is as a director of Tilly’s Garden Party Hire. This year we started our own fully licensed bar service for our marquee clients.

With the closure of some pubs in Pinchbeck and West Pinchbeck over recent years, Nick feels there is a gap for social drinking and a demand demonstrated by the popularity of the sports bar run by Pinchbeck United.

“We decided as a business that we could install our pop-up bar in the village hall, with the support of the committee, potentially on a monthly basis over the winter to provide residents with an opportunity to have a drink with friends and family in a social setting,” he said. “The location is within walking distance of hundreds of homes and we will be offering an authentic pub environment back in the heart of the village.”

He added: “Obviously if the pubs reopen in Pinchbeck then we’ll all be back to supporting those as local businesses – we’re looking to fill a gap, not start in competition to those established landlords.”

The first pop-up pub will be at the village hall in Six House Bank on Saturday, November 27, from 3pm to 11pm. Depending on demand, another could be held before Christmas.