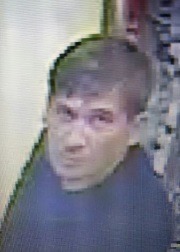 Can you help identify this man?

Pensioner had purse stolen while shopping

A woman in her 70s had her purse stolen while out shopping in Spalding yesterday (Thursday, June 18).

Lincolnshire Police have released images of a man they’d like to speak to in relation to the incident believed to have taken place in the Iceland store in Holland Market at around 10.30am.

A spokesman for Lincolnshire Police, said: ” We would like to speak to this man about an alleged theft in #Spalding.

“A woman in her 70s was shopping in Iceland on June 18, around 10.30 am when she discovered her purse had been taken.

“The man was in company of a woman who wore a black mask.”

Anyone with information is asked to contact 101 quoting reference 148 of June 18.