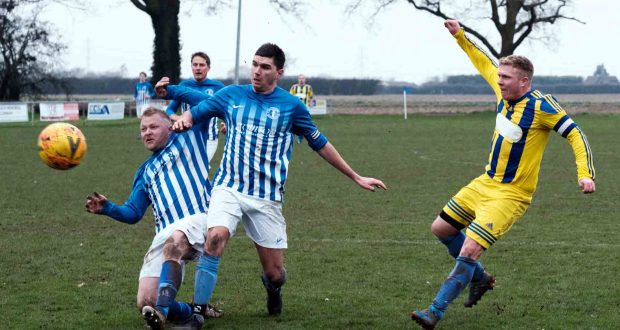 FULL BLOODED BATTLE: Moulton Harrox got the better of friendly foes Moulton Harrox Reserves on Saturday. Joe Townsend (right) is pictured getting a shot off. Photo by KEN SMITH

All eyes were on Broad Lane on Saturday as Moulton Harrox’s two ChromaSport PDFL teams clashed in the League Cup.

In something of an unprecedented showdown, the first team – who are perennial title hopefuls in the Premier Division – were 4-1 winners over Division One-based Harrox Reserves.

Moulton’s top team were 2-0 up inside 30 minutes thanks to Jamie Casey and Marcus Parry, before Phil Groves added a third early in the second period.

Ryan Wheeler pulled one back for the Reserves on the hour, before Dec Earth rounded off the win for Kev Nottingham’s side in the final minute.

There was another South Holland derby in the League Cup as Long Sutton saw off hosts Crowland Town Reserves 5-3. Jake Clitheroe’s hat-trick did most of the damage for the Magpies, while Cameron Lee and Matt Eaton also netted.

In the Premier Division, Holbeach United Reserves went down 2-0 at home to Thorney and Tydd were thrashed 6-0 at Stamford Lions.

Down in Division One, leaders Crowland Town were in Spalding Inter Services action as they beat hosts Spalding Harriers 3-1. Fellow divisional side Spalding Town lost 3-0 at Holbeach Bank in the same competition.

Holbeach Sports, meanwhile, are four points clear at the top of Division Three after a 5-0 win at Parkside. Jordan Keeble (2), James Clark (2) and Josh Ling netted.