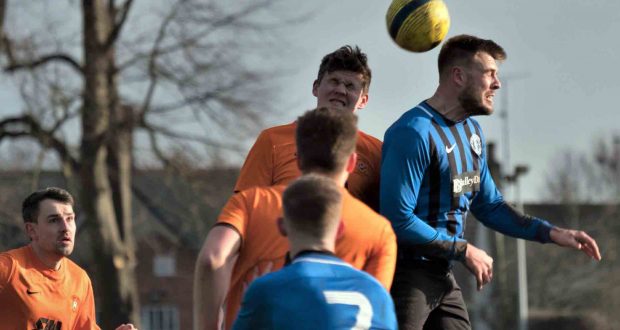 GOAL: Ashley Coddington was among the Harrox scorers. Photo by KEN SMITH

Moulton Harrox booked their place in the last four of the Lincs FA Junior Cup with an impressive 4-2 victory at rivals Stamford Lions on Saturday.

Goals from Ashley Coddington, Danny Maddison, Joe Townsend and Matt Watkin fired Harrox past their fellow ChromaSport PDFL Premier Division side – and indeed titles – and into the semi-finals.

Harrox, who last won the competition in 2018, are bidding to claim their sixth county crown.

Fellow South Holland side Crowland Town were unable to join them in the semis after being outgunned 4-2 at Lincoln Moorlands Railway.

Harrox will meet Moorlands in the semis.

In the league’s top tier, Tydd remain marooned at the foot after a 3-0 loss at Peterborough Polonia.

In Division One, Moulton Harrox Reserves are ninth following their 1-1 draw with Whittlesey Reserves at Broad Lane. Chris Beale got the home goal.

It was more of the same for rock-bottom Spalding Town, who were humbled 10-0 at home by Cardea.

Thomas Klinkovics bagged three of his four goals within the opening nine minutes at Knight Street.

In Division Three, Holbeach United Sports are now seven points clear at the top after their 3-1 win over Orton Rangers.

Joshua Ling, Charlie Parkes and Luke Scampion netted for the Tigers, who are still unbeaten after 12 league games.

Also on winning form were Tydd Reserves, who picked up an exciting 4-3 home triumph over Wittering Harriers Reserves.

Down in Division Five, Long Sutton A are second after beating Sawtry 4-1.
Joe Harrison (2), Jake Lally and Vincent Mackie grabbed the Magpies goals.