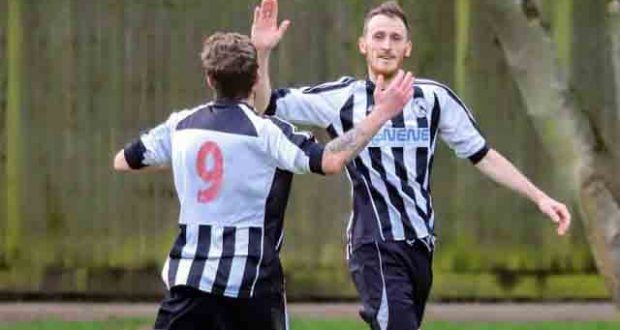 GET IN! Long Sutton A celebrate one of their four goals on Saturday. Photo by A GROVES PHOTOGRAPHY

PDFL round-up: Firth and Grigas keep Crowland Town on course for the title

In-form Crowland Town moved six points clear at the top of ChromaSport PDFL Division One with a 2-0 victory at FC Peterborough on Saturday.

Goals from Danny Firth and Harry Grigas gave the men from Snowden Field all three points and keeps them in the box seat for a return to the Premier Division.

Fellow second tier side Moulton Harrox Reserves were also on winning form over the weekend.

They battled to a 2-1 triumph over Oundle Town at Broad Lane to stay tenth in the table.

However, Spalding Town were handed a 5-1 home reverse by Wittering Harriers in the same division.

Mario Vaz got the Town consolation at Knight Street.

Up in the Premier Division, only basement side Tydd were in action out of the South Holland sides.

They suffered a 2-1 home defeat against Oakham United, despite Jordan Clow finding the net in the second half.

In Division Two, Crowland Town Reserves were on fine form as they hammered Leverington Sports Reserves 5-3.

Garry Jackson was the star of the show for the hosts with an impressive hat-trick, while Simon Acton and Alfie Anderson also found the back of the net.

Meanwhile, Holbeach United Sports are sitting pretty at the top of Division Three after a thrilling 5-4 victory at Hampton.

Josh Ling was their hero with three of the five goals, while James Clark and Charlie Parkes rounded off the win.

The Tigers are three points clear at the summit and remain unbeaten in the league.

Down in Division Five A, Long Sutton Athletic A enjoyed a 4-0 win over Parkside Reserves to go second.

Ryan Alexander bagged a double for the Magpies, with Mark Garner and an OG rounding off the rout.

In Division Five B, Sutton Bridge United went down 3-2 at home to Rippingale and Folkingham Reserves despite goals from Lee Still and Mitchell Bunn.