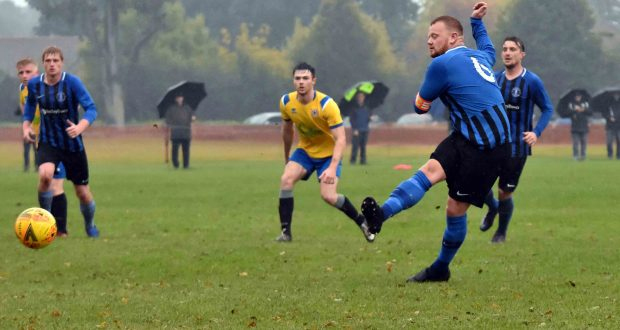 Lawrence Stewart and Liam Rigg both got amongst the goals as Town stunned their second-placed visitors – moving up to seventh in the table in the process.

Staying in the top tier, Holbeach United Reserves had the toughest day of their season so far as they slumped 5-0 at a resurgent Netherton United, with Dan Fountain netting twice.

Also hit for five were struggling Long Sutton Athletic, as they were handed a 5-1 home reverse by leaders Stilton United.

In Division One, Tydd are fourth after being held to a 1-1 draw at Whittlesey Athletic Reserves.

Ryan Jones netted their goal early in the second half.

Moulton Harrox Reserves are one place behind them, but they lost 2-1 at Ramsey Town.

At the foot, Pinchbeck United Reserves suffered a 3-0 home reverse against FC Peterborough, while Crowland Reserves were thumped 6-1 at Deeping Reserves despite Jake Woodward’s goal.

In Division Two, Holbeach United Sports got back to winning ways by seeing off hosts Stilton United Reserves 2-1.
Bradleigh Appleby and Adam Day grabbed the goals for the Tigers.

However, Long Sutton Reserves slipped up 2-0 at Peterborough City.

Down in Division Three, Tydd Reserves were on the receiving end of a 6-0 home hammering against Deeping United.

There was no such trouble for Division Four leaders Sutton Bridge United, who beat hosts Oundle Reserves 3-2.

In Division Five, a Dan Mason goal earned Holbeach Bank a 1-1 draw at FC Hampton A, while Pinchbeck A lost 4-2 at Hampton United.