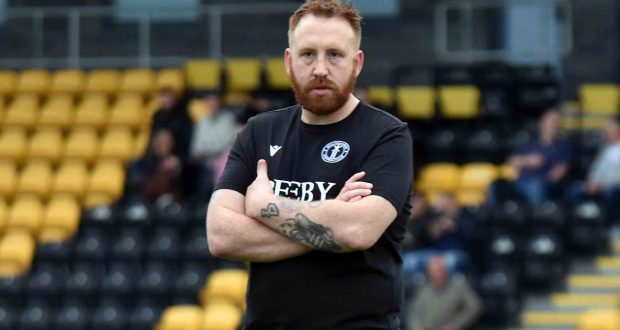 Bobby Patterson admits that everyone at Moulton Harrox needs to sit down and talk about the future after last Friday night’s crushing 7-0 Lincs FA Junior Cup final defeat against Wyberton.

The joint Moulton boss describes the humbling loss as his “worst moment in football” and said that he and co-chief Tim Cole are hurting after the embarrassing result.

The veteran defender, who felt the scoreline flattered his side and praised his keeper Ant Murphy, said he and Cole accept the blame for the defeat .

But he added that the performance was a culmination of a number of things not being quite right over the season – and wants to discuss the best way forward with the club.

Moulton will end the season without a trophy and were well off the pace in the race for the ChromaSport PDFL Premier Division, with their “golden generation” of local players another year older at a time when there are few youngsters pushing to replace them.

“I’ve said the final was embarrassing and I stand by that,” said Patterson. “It was my worst moment in football without a doubt.

“I don’t want to go over the performance again but that kind of result doesn’t just happen, it shows a few things aren’t right.

“Tim and I accept the blame as we’re the managers. Should we have carried on pushing forward with ten men and being 3-0 down? Probably not. Collectively, we weren’t good enough.

“But it was a final and playing damage limitation isn’t something we wanted to do, even if it would have made things less embarrassing.

“I saw a lot of players just give up. We needed to be nastier and more physical, but I don’t think we even had a yellow card. To play like that in front of nearly 800 people is criminal.

“Ant (Murphy) was our man of the match, 7-0 was flattering for us and I congratulate Wyberton.

“I won’t lie, we’re both in a dark place after the final and we’re hurting. We put a lot of effort in and results like this really get to you.

“We’ve been very lucky here to have a core group of players for a long time and we’ve had great success.

“But we’re all getting older and I don’t see many young players waiting in the wings.

“I would like to see more commitment from the players as regards availability and training. Those issues are at the root of what happened in the final.

“I’d be interested to hear what the club wants to achieve moving forward. The same players can’t keep on going and I’d love a bunch of 18-year-olds to be pushing for a place in the first team, but that’s just not the case.”

Moulton have one more scheduled fixture to complete in the PDFL Premier Division, but Patterson added that they are struggling to find a pitch to face Stamford Belvedere on – and that the game may now not go ahead, meaning they’d have to forfeit and take a second points deduction in as many league fixtures.