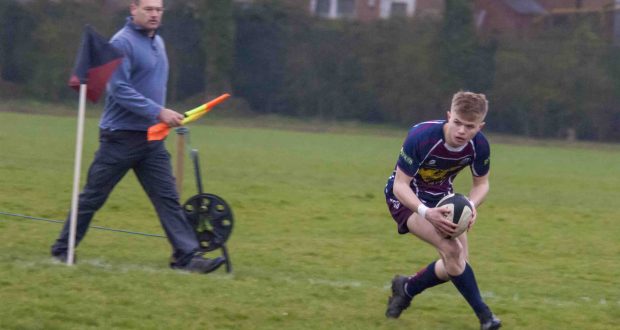 Town, who hadn’t won away in the league all season, stormed to a 24-20 triumph in Luton to move into sixth place in the standings.

This was a deserved victory as the Elephants, on balance, had been the better team. But it did not start out that way, with a penalty conceded within the first few minutes being successfully converted.

Then, after a quarter of an hour with Spalding pressing, a Harry Sharman pass was intercepted by the Stockwood centre, who ran the length of the pitch to give his side a ten-point lead.

Undeterred, Town pressed forward with the backs – led by fly half Conall Mason and centre Dan Adams – giving no room to Stockwood.

With a couple of forward drives by Luke Turner, Sharman was able to squeeze over the try line for a converted try.

Spalding were then, in one of several lapses, caught offside as half time approached. The resulting penalty was kicked and the home lead was back to six points.

However, Town were still making good ground with colt player Miguel D’Silva, at lock, impressing with his carries on his first start.

With the try line begging to be crossed, Spalding knocked on and then they were held up over the try line with the half time whistle being blown.

Within a couple of minutes Spalding started to turn the tables. Centre Willis Ingleby soon scored a superb individual try, breaking from the half way line and down the right hand side, before kicking over the advancing defence.

A further controlled grubber kick followed and then the touch down.

Playing full-back Gav Sharman then had a couple of notable counter-attacks and Mason was also impressing with his distribution and his tactical, kicking pinning Stockwood back in their half.

But captain Adams stepped forward with a typically strong run, breaking two tackles to go over and give the Elephants a four point lead.

However, Stockwood’s strong running fly-half nearly broke Spalding’s efforts, as he was allowed run through five attempted tackles to score. And, with the conversion, Town had 15 minutes remaining to overturn the league leaders’ three-points advantage, which they eventually achieved in added time.

With the clock indicating time up, the hosts were awarded a scrum ten metres in from touch, with the referee calling last play. All Stockwood had to do was kick the ball out to win the game.

Spalding’s scrum had been getting stronger throughout the game and, as the home team’s scrum-half fed the ball in, a shove forward disrupted the scrum.

Stockwood were just in control with the ball back at the feet of their number eight, who decided to pick up and kick to touch.

But taking time to execute his kick allowed Harry Sharman to be on him and charge down the kick.

Sharman gathered the ball and set up a ruck in wet and slippery conditions, the order of the day was pick, drive and ruck. Encouraged by scrum-half Harry Exley, Town started to edge step by step towards the Stockwood’s try line, with all the forwards taking it in turns to crash forward.

John Barrett and Harry Cole had big hits along with Pete Waudby and Jacob Greaves. The try line was now in reach and Sharman was held up.

Stockwood infringed, giving penalty advantage to Spalding inside the last five metres. After 15 phases of play and five minutes of added time, Anker finally was able to force his way over the line to snatch victory.

And, with Mason converting, the players reacted with jubilant celebrations – showing what this outstanding win meant.

Spalding now make the trip to Manor Park (Nuneaton) in the quarter-finals of the RFU Vase Cup on Saturday (2.15pm).