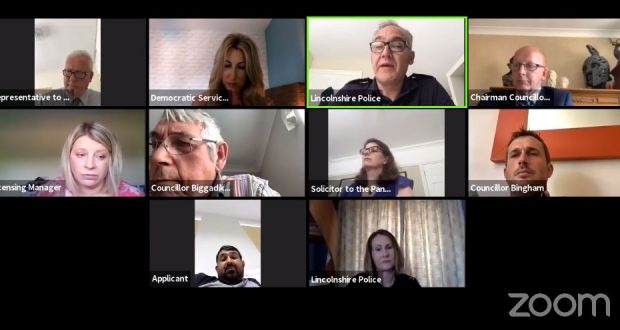 A screenshot from the panel meeting held online.

A new shop for Sutton Bridge has been granted a licence despite complaints from members of the public.

After speaking to applicant Raju Goraniya about conditions of the premises licence, Lincolnshire Police told South Holland District Council’s Licencing Panal it had no concerns over the opening of a One Stop shop on Bridge Road.

The hearing heard that One Stop is a franchise of Tesco for whom Mr Goraniya had worked for a number of his 15 years spent in retail.

An alcohol licence was granted for 6am to 11pm, though Mr Goraniya told the panel he intended to close at 10pm.

The panel heard that was roughly in line with a number of other similar shops in the vicinity which also closed earlier than their 11pm licence.

Objections from the public expressed concerns that having more places to drink would lead to more anti-social behaviour in the area and litter.

Coun Francis Biggadike said: “I haven’t got a problem with the applicant. He’s probably got as good a pedigree as we’ve ever had an applicant had, but it’s the crime and disorder that concerns me.

“The longer the stores open at night the more chances of crime taking place.W

“The only unsolved murder in Lincolnshire happened at Sutton Bridge because it was opened all through the night. I’d hazard that the police would have to come from Spalding.”

The police’s Sgt Kim Enderby, said that Sutton Bridge had no more of a problem with anti-social behaviour than other places of its size and said in response to Coun Biggadike: “Officers are likely to have to come some distances, but at this moment this store doesn’t exist, so it can’t be responsible for the problems that may have occurred.

“If the store adds to it we will take effective actions against the premises.

“If the premises run correctly, if the licencing objectives are promoted and a responsible person is in charge there shouldn’t be any problems.”

The panels decision in granting the premises licence states: “The objections were in the view of the Licensing Panel, speculative, generalised and some not relevant to the licensing regime and in particular the matters complained of cannot be contributed to the premises as it is a new business.

“If there are complaints relevant to any of the licensing objectives then the police can take appropriate steps and an application can always be made for the premises licence to be reviewed.

“The panel noted the experience of the applicant and therefore the premises should be a well run business.”