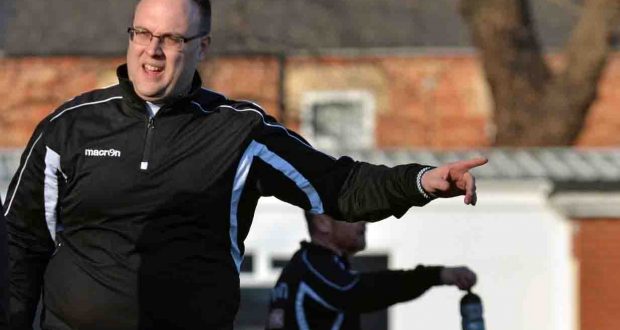 Lewis Thorogood feels that the pressure is on BetVictor NPL South East Division leaders Leek Town to beat his Spalding United side on Saturday.

The table-toppers are two points clear of Stamford at the summit ahead of their trip to the Sir Halley Stewart Playing Field (3pm), while the Tulips are some 20 points back in eighth.

However, Spalding have already picked up more points than they managed in the entirity of last season and are now firmly in the hunt for a play-off position.

Interim boss Thorogood, who is in charge until the end of the season, says that reaching 30 points means his team have achieved their first ‘mini-goal’ of the season.

He’s now challenged them to get a result on Saturday and climb up to seventh in the table.

“Obviously Leek is a very tough game,” said Thorogood. “They are top of the table for a reason.

“But I certainly don’t think we should fear anyone in this league.

“Leek have some very strong attacking players and have the ability to either play good football or be physical and go long.

“What is clear is that our pitch will be a bit of a leveller – with the weather as it is, I don’t expect it’ll be one to play good football on.

“What I will say is that all of the pressure will be on them, people will expect them to come here as the league leaders and win the game.

“Our confidence is high after our recent results and we’re pleased to have reached 30 points.

“We set ourselves goals and that was one of them. We now want to get into seventh place; let’s see if we can achieve that on Saturday.

“What I will say is that, if the lads are able to put in as much effort and commitment as in the past few games, we’ll certainly make it hard for Leek.”

Keeper Michael Duggan and full-back Scott Floyd should return to the Spalding squad on Saturday, while Jamie Jackson could be fit enough for the bench.