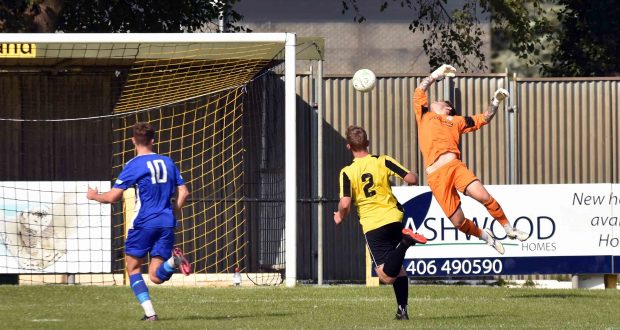 Phil Barnes admitted that striker Marc Newsham was the difference between the sides as Holbeach United suffered a 4-0 home defeat in the Emirates FA Cup on Saturday.

Ace hitman Newsham helped himself to a perfect hat-trick in the first half with goals on 16, 26 and 41 minutes at Carter’s Park as Sheffield led 3-0 at the break.

Ryan Viggars added a fourth early in the second period for the Pitching In NPL South East Division side, before Holbeach’s Joe Smith was sent off for lashing out.

There was some positive news for the Tigers late on with 17-year-old James Clark handed a debut and striker Liam Tunstall also made his bow after signing for the club prior to kick-off.

It’s a third defeat on the spin for Phil Barnes’ side, but the boss wasn’t overly disappointed by what he saw from his side.

“Sheffield are a decent side,” admitted. “Newsham is also a very good striker and he certainly made a difference, really.

“We set out to frustrate them in the first half and I thought we started well.

“But we got done by a long ball over the top for the opener. Then they had a really good spell before half time and the tie was pretty much over.

“They may have taken their foot off the gas a little, but I thought we kept things respectable and I can’t fault the effort the lads put in.

“It was nice to be able to give young James a debut and he did really well, while Liam (Tunstall) showed some good moments.

“In the end, Newsham was different class and he was very clinical with his chances.

“As for the red card, Joe was fouled and lashed out – we can have no complaints.”

On signing Tunstall, he added: “Liam was certainly somebody we discussed over pre-season. We know what he’s all about and I’m really pleased to have him on-board.

“He’s got goals wherever he’s played and hopefully he can bring that to the table for us, too.”

Holbeach are back in UCL Premier Division action at Boston Town on Tuesday night (7.45pm).