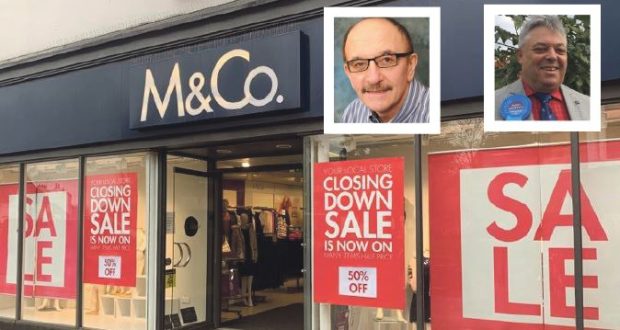 Creating a Business or new Community Improvement District is the latest idea being looked into to help town centres such as Spalding.

As the ‘closing down sale’ signs went up on another shop in the town, M&Co in Bridge Street, South Holland District Council officers are looking into whether to create a new group town centre businesses can get involved with.

England’s first ever Community Improvement Districts were launched in London just before Christmas having previously been used in Scotland and parts of the USA.

They’re similar to Business Improvement Districts (BID) which have been set up in a number of towns and involve businesses paying a levy so they can fund their own ideas and improvements for their towns.

The difference with a Community Improvement District (CID) is the idea that the whole community, rather than just the businesses, get involved, including the local authority.

There was an attempt to create a BID in Spalding a few years ago that failed while one was created in nearby Boston but didn’t last long.

But Coun Rodney Grocock, the district council’s portfolio holder for assets and planning, thinks local businesses may be more likely to contribute to a BID now fewer traders are paying business rates.

And Coun Roger Gambba-Jones says more might also get behind a CID and urged the council to look into that.

Coun Grocock said: “It’s something that’s been raised and we need to look at it.

“I personally think it’s a very good idea but it also depends on what the group and cabinet say.

“Yes, it didn’t go well last time, and a BID didn’t go too well in Boston, but this time I think it will benefit independent traders a great deal.

After seeing about the new CID areas, Coun Gambba-Jones says he wanted to start a conversation about setting one up in Spalding and possibly other towns in South Holland.

He said that though BIDs are independent of councils, the authority would still have been the biggest contributor to the financial pot and could help shape a CID.

“It’s intriguing and something that should not be ignored,” he said. “We need all the help we can get and need to do something.

“Many businesses are paying less business rates now, so may be more willing to put in.

“I think with the Town Centre Improvement Group we can probably ensure what happened in Boston, where different people were moving in different tangents, doesn’t happen.”

The news comes as the M&Co Bridge Street branch in Spalding town centre was due to close.

M&Co has not responded to The Voice’s request for a comment but a member of staff at the branch said the shop was due to close in “mid to late February”.

“I’d heard a rumour they were looking for a different shop in Spalding and I really hope that’s the case,” Coun Grocock continued. “It’s sad when any shop leaves, especially when we’re trying to improve the shopping experience in Spalding.

“I spent time recently with officers in the town, planning the next stage of making the town look better, hoping to soften the look of the town and make it more appealing to shoppers.

“We’ve had some good feedback from the deep cleans we’ve done and hoping to give retailers some positivity, but it is difficult and every town in the country is struggling.”