Nene Valley Harriers have been knocked off their perch at the top of the Frostbite League.

Things could have been worse for the club that has a host of South Holland members, but on a day when the ladies stole the show generally, the Nene Valley girls produced a telling performance.

David Hudson of the Huntingdon club BRJ made light work of the multi-terrain five-mile course in March, winning in a time of 26.57mins. Hudson was pushed all the way by Riverside’s Michael Taylor, who finished just a second later.

The only locals to make the top ten were Nene Valley pair Simon Fell (fourth) and Lee Hartill (tenth), who clocked 28.28mins and 29.35mins respectively.

League history was made as Georgina Schwiening of Cambridge and Coleridge finished sixth in a time of 28.40mins – the highest ever placing by a lady in the 30-year history of the league.

The Nene Valley trio of Emma Tomlinson-McCrae, Lindsay Lister and Laura Grimer all finished within seconds of each other, making the top 100 to save the day for Nene Valley.

Harrier Joshua Goodwin was the first local home in the junior race as he finished a fine fourth.
Eliza Mardon, also of Nene Valley, was second girl.

Nene Valley star Edgar Sumskis provided the excitement at the final round of the North Midlands Cross Country League. in Nottingham. Sumskis went toe-to-toe with teenage England international Sam Stevens (Leicester Coritanian AC) in the senior men’s race, but the Nottingham University student pulled away from Sumskis in the final straight to finish three seconds clear with a 35.24mins clocking over the 10km course. 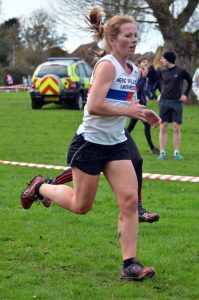 In the senior ladies’ race, the Nene Valley athletes fared well. Emma Randle and Ruth Jones placed in 17th and 19th positions respectively, while Sophie Wilkinson-Hargate also had a good run and ended the season as second over-40 lady.

It was a busy weekend of cross country for Nene Valley’s youngsters, and even with several athletes missing due to school running commitments, they completed a fine season with the under-13 and under-15 girls finishing as league runners-up, as did the under-13 boys.
The under-17 boys were third, too.

Under-17 Aaron Hunt managed fourth, while Hugo Brill and Harry Hewitt came home sixth and seventh in the under-13 race.
Evie Hemmings was tenth for Nene Valley in the girls’ under-11 race and her sister Lottie was sixth under-13, with Leone Hart seventh.
Hannah Knight finished as eighth under-15, while Amber Park squeezed into tenth place in in the under-17 event.