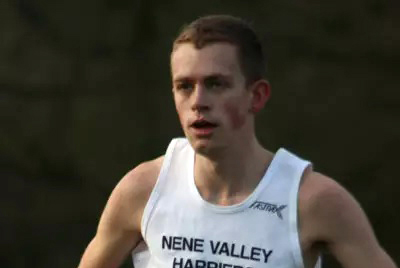 Despite never having competed at this level before as a team, the Harriers were sensational in the Division Three fixture, writes BARRY WARNE.

Team captain Devon Spencer led by example, winning the B triple jump with a distance of 9.94m.

The team was predominantly made up of youngsters, several of whom took on extra events to maximise the team point scoring potential.

Rosie Jacobs competed in the high jump, 100m hurdles and 400m hurdles, finishing second in the B 400m hurdles race. Alexandra Pullen, Jasmine Allen, Megan Sims, Ellie-May Stokes and Ellie Piccaver all doubled up, with Sims finishing as runner up in the 400m hurdles with a 68.24secs clocking.

As is so often the case with Nene Valley, the throwers proved to be the powerhouse of the team, with wins for Lydia Church in the B discus and Kelly Lawrence in the B Hammer.

Becki Hall also won the B discus and finished runner up in the shot with a throw of 12.85m.

Also impressing was Andrea Jenkins, who threw the discus 35.69m to collect maximum points. She also finished third in the hammer.

Consistency was the name of the game on the track, and despite the only event winner being Lloyd Kempson in the B 1500m, points were accumulated steadily.

Rownan Rawlings was third in the B race and also picked up valuable points with a fifth place finish over 200m.

Callum Winchester-Wright secured two third place finishes in the triple and long jumps, while Adam Fidgett covered three events – with his best placing being fourth in the B pole vault.

Shot putters Dan Tinkler and Simon Achurch won the A and B shot, with Tinkler throwing 14.73m for his A win. The pair of star throwers collected more points with both finishing third in the discus. Achurch also took second place in the B javelin. The A javelin was won by Nene Valley’s Alex Ingham with a throw of 53.65m.

The stand-out performance came from Molly Peel in the under-17 1,500m, which she won in a time of 4.46.4mins –knocking almost four seconds off her PB.

This was the Harriers finest performance in the league this season, and the under-17 girls were dominant in the middle distance events with Amber Park and Olivia Mead winning the A and B 800m in 2.21.23mins and 2.23.80mins respectively.

Ella Robinson won the B 300m and there were first places for shot putters Elizabeth Moorhouse and Roseanna Clark along with Javelin thrower Eleanor Smith.

The under-15 girls also performed well and there were wins for sprinters Katie Calcutt and Alicja Gawronski along with middle distance runners Flo Brill, Sophie Reeves and Ellie Rainbow.

Danielle Pusey threw the hammer 31.26m to pick up maximum points, while Millie Weller doubled up to win the pole vault and B high jump. Francesca Fenwick also finished first in the long jump and B 75m hurdles. Katie Marsh enjoyed firsts in the under-13 70m hurdles and long jump, while Rosie Mead took the honours in the B 1,500m as did Ria Cardew in the B shot.

Meanwhile, under-15 sprinter Freddie Fraser knocked nearly half a second off his 200m best when winning in a speedy time of 24.10secs. Fraser also enjoyed a further first place finish over the 80m hurdles.

Throwers George Harrison and Donovan Capes collected three wins and two second places between them and sprinters Lewis King, Jason Boyle and Joslin Carter all tasted success. Seth Cardew won the B 80m hurdles, while Tomi Ogunyoye was runner-up in the under-17 100m and 200m, along with the high jump while Thomas Fox won the B 100m.