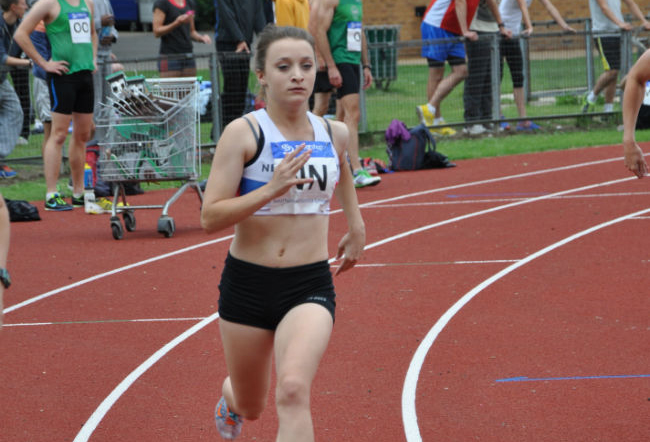 RECORD BREAKER: Rosie Marshall was in fine form over the weekend.

Rosie Marshall smashed a Nene Valley Harriers club record as she shone at the Birmingham Games on Saturday.

Teen ace Marshall ran well in her under-20 ladies’ 800m at the Barclaycard Arena (formerly known as the NIA) and smashed the club indoor record by six seconds.

Her time of 2.30.83mins took second place after she led comfortably for the first three laps – but the winner increased her stride over the last couple of laps and Marshall was unable to hang on for the win.

Also in action was Harrier Jasmine Allen, who was the early starter in the under-15 girls’ 200m.

These are run in heats, but there are no finals so the positions are determined on time run.

Allen had the outside lane draw and did not see another athlete until her nearest competitor challenged on the fourth bend. She fought hard and pulled away as she crossed the line to win in a time of 27.69secs, which gave her ninth place overall.

Allen also competed in the 60m and ran a respectable 8.64secs.

After a poor start, she came through well later in the race.

Again, he finishing second in his heat but managed fifth overall.