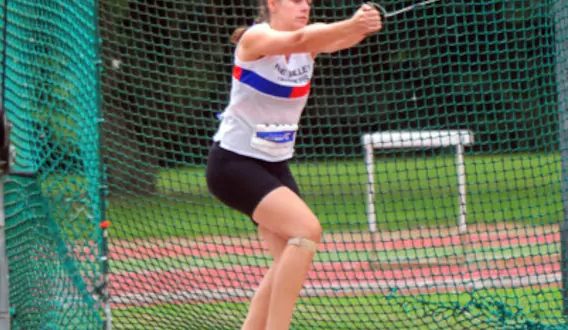 Nene Valley Harriers’ ladies increased their chances of joining the clubs making the Eastern Masters track and field league finals with an exciting win in last Monday’s fixture at the embankment track.

Though still trailing Royston Runners and Corby AC in the overall standings, Nene Valley are well-placed to qualify as a high scoring third placed team.

Peterborough AC finished fourth out of the seven teams. Judith Jagger played a starring role with victories in the shot, discus and triple jump.

Meanwhile, Nene Valley’s men suffered a rare defeat, finishing behind a Corby team who themselves were determined to make the finals.

After three of the four league fixtures, the Nene Valley lead is so great that only a no show in the last fixture at King’s Lynn could prevent them from reaching the end of season finals.

The ever-impressive Simon Achurch dominated the over-35 throws with winning distances of 11.02m in the discus and 35.00m in the shot. Kevin Bates also took maximum points in the over-60 discus throwing 20.67m.

Richard Phelan then jumped 1.45m in his over-60s triple jump win, while James Mcdonald won the over-35s 1km walk with a speedy 5.45.2mins.

One of the performances of the day came from Duncan McGrory, who ran an extremely rapid 4.59.2mins for his over-60 first place.

Peterborough AC finished fourth and are out of the running for a finals place.