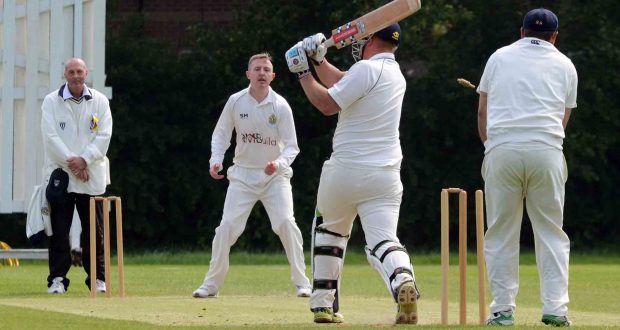 A devastating bowling display from Will Naylor guided Spalding Town to a 43-run success over old foes Billingborough on Saturday.

The victory wasn’t enough for Jonathan Miles’ side to hang onto their status as sole South Lincs and Border League Premier Division leaders, though.

They are now level on points with rivals Bourne 2nd in the standings after only managing 17 points from their derby success.

Having been put into bat, Spalding lost key batsman Josh Newton – bumped up to opener in the absence of the in-form Jon Manton – for just 12.

But that didn’t rock the promotion hopefuls too much and a solid partnership between Joe Broomfield (30) and skipper Jonathan Miles (31) put them in command.

However, once Stuart Gollop (5-27) bowled Broomfield and Aaron Pullum (3-39) castled Miles, the wickets began to tumble.

Gollop snared Ethan Lawrence (10), then knocked over Peter Cook for a duck before getting rid of Josh Lawrence.

At the other end, Pullum had Rob Ambrose (1) caught and bowled and trapped Matt Gill (2) LBW.

Thankfully for Town, Harry DeCamps (21) and Naylor (7) put on a few runs at the end of the innings before Town were all out for 142 in the final over.

The Billingborough reply was totally dominated by Naylor, who claimed the scalps of all of the top six batsmen.

He bowled opener Ellie Stanley (0) and then had Dylan Garfoot caught by Lawrence for just four.

Number three Pullum followed up his fine showing with the ball with an impressive 41, but his partners dropped like flies.

Naylor smashed Jonathan Parrish’s (0) stumps, then had Richard Wells (0) caught behind and removed Jed Humphries (5) to leave the visitors in dire straits.

Naylor eventually bowled Pullum too, while the rest of the Spalding bowlers decided to get in on the act too.

Julian Wilson (1-15) bowled Bill Sadler for a duck, while DeCamps got the scalps of both Paul Goodwin (14) and Gollop (1).