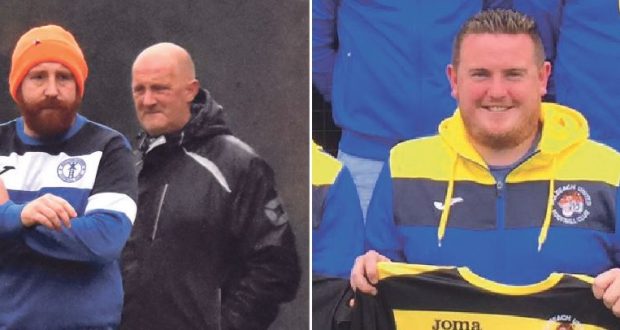 Moulton Harrox have made a managerial change for next season.

Bobby Patterson will take on the joint manager position alongside Tim Cole who is coming in from Holbeach United for the 2021/22 campaign.

Current manager Kev Nottingham will return to his previous role as manager of Harrox’s reserve team with Danny Kingman stepping down from that role.

Nottingham will remain in charge for the ChromaSport Peterborough Senior Cup in which Harrox are in prime position to qualify for the semi-finals after three wins out of three.

Current assistant manager Patterson says the plan all along was for him to take over from Nottingham who won the PDFL title alongside Paul Crowson in 2019.

Nottingham previously stepped up from managing the reserves who won Division One in the two previous seasons under his stewardship.

“Danny Kingman is stepping down to spend more time with his family and looking forward we wanted the reserve team to get back to what it was, supplying players for the first team,” Patterson said. “We were looking at options and Kev put himself forward to take it on. That’s the kind of class guy he is and how much he wants the club to do well.

“He was the one who brought me in and it was always the plan for me to take over eventually anyway.

“Because of everything I’ve only had seven or eight games alongside him.

“It’s a tough job on your own so I spoke to Tim who I’ve known for a long time, since we were youngsters.

“He was eager to get involved and the board were happy with it so we’re going to work together from next season.

“I know Kev’s going to be there to help and he’s been brilliant for me.

“I’ve learned a lot from him and I really appreciate everything he’s done.”

Moulton made it three wins out of three in the PDFL Premier Cup last Saturday beating Eunice Huntingdon 4-1 with Joe Townsend bagging a brace. Ashley Coddington and Ian Bradbury were also on the scoresheet.

Patterson thinks the club need one more win to top their group and advance to the semi-finals against the runners up of group two.

He added: “Winning a trophy would be a fantastic way for Kev to go out.

“He’s already won the league title alongside the two he won for the reserves which shows how good he is.”
Cole meanwhile joins after a long association with Holbeach United.

He was brought into the managerial team five years ago after impressing while managing the Holbeach Sunday side which went two seasons unbeaten and won the Lincolnshire Sunday Cup.

“It was a really hard decision to leave Holbeach,” he said. “I’d sort of made up my mind I was going to step down at the end of this season and then Bobby contacted me.

“It’s exciting to be involved with Moulton. They’re a very good local side and it’s a chance for me to step up into a managerial role.

“I’m looking forward to working with Bobby who has had a year of working with Kev. We’re going to work together to look to win every trophy we enter.

“I know some of the players already and have managed a couple before.

“I’ve also got a few ideas about people we could bring in to add a bit of competition to an already very good squad.”