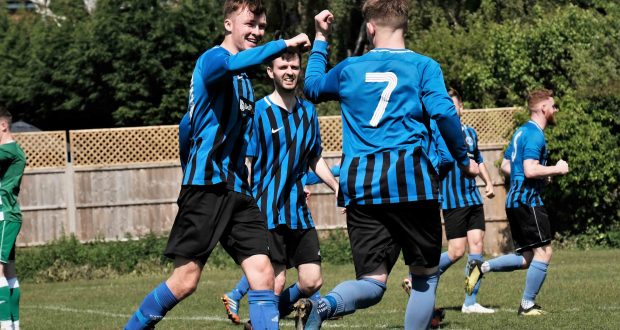 ON-SONG: Moulton celebrate one of their goals against Eye. Photo by KEN SMITH

Bobby Patterson has told his in-form Moulton Harrox side to take nothing for granted ahead of Saturday’s Peterborough Senior Cup semi-final against Wittering Premiair.

Harrox are red-hot favourites for the last four showdown at Knight Street (2pm KO) and come into the clash hot on the heels of a 5-0 victory Eye United.

Assistant boss Patterson, who is on record as wanting to win the ChromaSport PDFL supplementary competition as a tribute to outgoing boss Kev Nottingham and club stalwart Paul Crowson, knows his charges are hot favourites to progress to the final.

But he used the example of Manchester City losing to underdogs Chelsea in Saturday’s UEFA Champions League final as a reason to remain laser focused.

“We’ve got to treat them with respect,” said Patterson, who will step up to the role of joint boss with Tim Cole next season. “Obviously we accept that we’re again massive favourites here.

“Last week I wanted the lads to turn on the style against Eye and put on a bit of a show.

“This week it’s all about reaching that final no matter what it takes.

“Reaching any final is always a big bonus and we’ve said repeatedly that we want to win this one for Kev and Paul.

“We’ve just got to be ready for anything. Nothing is a given in football – look at Man City on Saturday, I bet most people thought they’d win easily. But Chelsea went home with the cup.”

Patterson and Harrox do have one major injury concern, with skipper Billy King injuring his knee after landing awkwardly early in Saturday’s win over Eye.

The central midfielder is considered a doubt to feature again this season and is waiting for the swelling to go down before a decision is made.

Andy Law should be fit to join in with the squad, though.

“I don’t know about Billy,” added Patterson. “He landed badly and his knee is very swollen, there’s no telling how bad things are.

“We’d obviously love him to be available but it’ll be a late call on him. Young Alfie Woodward did well in the middle after Billy went off, so at least there was one positive there.

“We’re hoping Andy Law will train this week and then be back in the squad too.”

Moulton, who were unbeaten in the PDFL Premier Division before the regular season was curtailed due to COVID-19, are up against a Wittering side that were top of Division One at the same stage.

They progressed to the last four by seeing off Eunice Huntingdon 4-2 the week before last, with dangerman Andrew Moss netting a treble.

Patterson is aware of Wittering’s firepower and is refusing to look past them and at a potential final against one of Uppingham Town and Peterborough North End.

He said: “One thing I know about Wittering is that they have two strikers who know where the net is.

“You’d perhaps expect North End to win the other semi, but I’m focused on Saturday and am taking absolutely nothing for granted.”