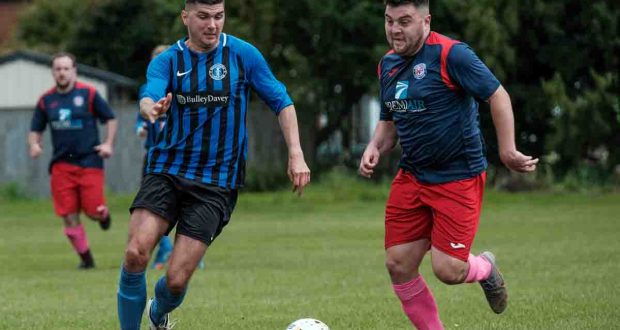 Upbeat Bobby Patterson chose to focus on the positives after seeing Moulton Harrox suffer a shock semi-final defeat against Wittering Premiair on Saturday.

Favourites Harrox were held to a 0-0 draw in the Peterborough Senior Cup last four showdown at Knight Street, before going down 4-3 on penalties against a side that played one level beneath them last season.

The defeat marks the end of an era for the boys from Broad Lane, with manager Kev Nottingham stepping down to take charge of the Reserves and club stalwart Paul Crowson walking away from the first team after close to 1,700 matches in the dugout in various roles.

Number two Patterson, who is stepping up to become joint boss with the incoming Tim Cole, refused to be too downbeat and is now looking to the future.

“It’s very disappointing for Kev and Paul to end things this way,” admitted the assistant boss. “But it was just one of those days for us.

“We had so many chances on the day and I’m not really sure our keeper had a shot to save. But it’s the old cliché in football – goals win games. It was all about doing the job in 90 minutes for us and we couldn’t quite get the job done.

“Penalties are always a lottery and you can’t get too angry when you lose a shoot-out. It’s a big shame, but we have to move forward and focus on next season.

“Having this competition has been a bit of a bonus for us. Tim (Cole) has been able to have a look at the players from afar and we can see what we need to improve.

“It’s exciting. The plan is to retain all of the lads, but add some quality and get some competition for places.

“We’ll have some time away, then it’s back for pre-season and some tough friendly games – which is exactly what we wanted.”

Harrox were in trouble before a ball was kicked on Saturday, with only 13 of their 18 registered players available – and that included Patterson himself.

Despite missing midfield regulars Billy King, Dalius Kisla and Andy Law, Harrox still created plenty and tested Paul Greenhalgh multiple times in the first half – most notably when he kept out a free-kick and stinging strike from Declan Earth.

Moulton’s Ian Bradbury then saw a shot hit the woodwork 15 minutes from time and nodded an injury-time header over as the clash went to penalties.

It was Bradbury who saw the first spot-kick saved, before Ash Coddington’s effort somehow came out after hitting both posts – allowing Ash Middleton to fire Wittering into a final against Uppingham Town.

On the defeat, Patterson added: “We were confident ahead of the game, even with so many injuries.

“We had a lot out, but no excuses – we still had the players to get the job done on the day.

“It’s frustrating for all of us, we know we should have won and we’ll have to get over not winning this one.

“All we can do now is focus on being better when we return for pre-season on July 8.”

Although they are yet to release their pre-season schedule, Patterson has confirmed that it will include games against Holbeach United, Pinchbeck United, March Town, Wyberton, Horncastle Town and a few others.