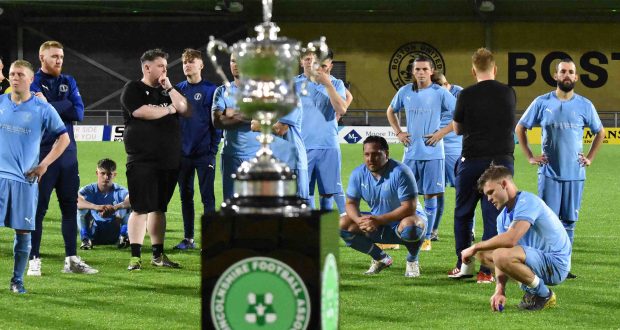 LOOK AT WHAT YOU COULD HAVE WON: Moulton Harrox players and staff look despondent after the final whistle on Friday. Photo by JAKE WHITELEY

Co-boss Bobby Patterson admitted that he was left feeling “disappointed, hurt, embarrassed, upset and emotional” after seeing his Moulton Harrox side humbled 7-0 by Wyberton in the Lincs FA Junior Cup final on Friday night.

Harrox had hoped to clinch their sixth victory in the county competition at Boston United’s Jakeman’s Community Stadium, with a huge crowd of 791 in attendance.

But it proved to be a nightmare evening for the five-times winners, who finished the game with ten men after a red card to key defender Ashley Coddington in the second half.

The defeat came just 72 hours after Harrox were dumped out of the ChromaSport PDFL Cup at Deeping Rangers Reserves, meaning Patterson and Tim Cole’s side will finish the season without a trophy.

Former Holbeach United striker Alex Beck led the charge for Wyberton with a hat-trick, while Liam Ogden and Ollie Pinner – both well known for their exploits on the South Holland non-league scene – also netted on the night.

Ollie Drummond opened the scoring, while Scott Dawson also got in on the act for a Wyberton side that are hunting a treble this season.

A deflated Patterson said: “Disappointed, hurt, embarrassed, upset, emotional, not adjectives I like to be associated with.

“I can only apologise to everyone who came out to support me and the team Friday night.