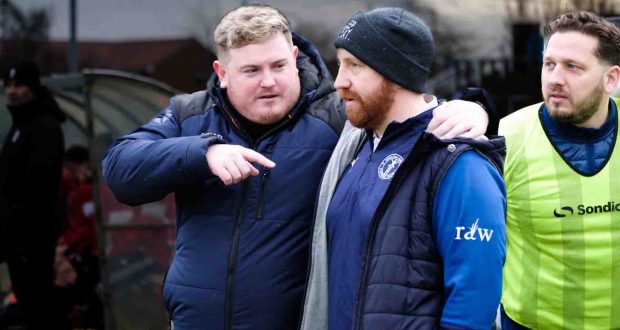 Moulton Harrox are bidding to win the Lincs FA Junior Cup for a sixth time on Friday night as they take on Wyberton in a blockbuster final at Boston United’s Jakemans Community Stadium (7.45pm).

The Broad Lane side haven’t reached their usual high standards in the ChromaSport PDFL Premier Division this season, but co-boss Bobby Patterson – who won the competition as a player with Harrox – knows that county glory would make up for that.

There’s always been something special about the county competition for Moulton, who last won it with a victory over Coningsby back in 2018. Indeed, Harrox talisman Joe Townsend is looking for a fourth success with the club.

But Patterson and his fellow co-chief Tim Cole know that beating Lincolnshire League leaders Wyberton will be no mean feat, given the quality and experience they boast in their squad.

“We’ll need to be at our best and very much up for the challenge,” said Patterson. “We know what Wyberton are all about and it won’t be easy.

“They will be direct, physical and very ugly – which is meant as a compliment. They are very good at what they do, you don’t get to be top of the Lincs League if you’re not a strong side.

“You look at their squad and obviously Alex Beck stands out, he’s a massive goal threat. But they’ll be looking at Josh Ford in a similar way.

“I think it’s going to be a very tight game, but we’re all very excited to be playing at Boston United. It’s a great new ground and very local, so you’d expect a decent crowd.

“I’m just hopeful that all of the other fans of South Holland teams turn up and get behind us. We’d do the same if it was Spalding, Holbeach or Pinchbeck United in a final of this magnitude.”

Patterson, who was on the field when Moulton beat Coningsby 5-1 in 2018, admits that the grand occasion feels much different as a manager.

He knows that he can’t change what happens on the pitch, but would love to find out what it feels like to lift a trophy as first team manager of the club he represented with distinction.

But he’ll have to do it without the services of key defender Jonny Clay, who faces around a year out injured after undergoing an operation on a ruptured Achilles tendon.

“As a player you know that you can make a difference on the day,” he added. “But you certainly work a lot harder as a manager!

“Somebody once told me that how you perform over a season in the league should reflect on the manager, while the cups are all about the players.

“Our league form hasn’t been perfect, so Tim and I know that we have room for improvement.

“It’s been much better in the cups, though. So the lads have proven that they have the ability to beat anyone on their day – which gives me confidence.

“For the likes of Joe Townsend, this is a chance to add to his legacy here. He could have four county cup wins with Moulton; I’m not sure anyone could match that.

“Likewise, Ashley Coddington can add to his story with the club – we’ll need him to be the leader at the back in Jonny’s absence and it’s his time to become a multiple-time winner and create his own legacy here.

“Whatever happens, we’ll give it our all.”

Ahead of the final, Moulton refused to play their scheduled PDFL Premier Division game against Wittering Premiar at Broad Lane.

The club were left frustrated with the league’s decision to force them into what would have been a triple game week, with the League Cup semi-final at Deeping Rangers Reserves on Tuesday (see story, right) and Friday’s county final lying in wait.

The no-show will see Wittering awarded three points and Harrox deducted a point, but Patterson shrugged off the situation and pointed the finger at the PDFL.

He added: “We did what we had to do. The league game should have been moved, but the league wouldn’t budge.

“They should have been doing a bit more to help us given the week we had ahead.

“We’ll lose a point for it, but that’s irrelevant in the grand scheme of things.”

Anybody wishing to attend Friday’s finals needs to have purchased a ticket in advance to enter the ground. There will be no ticket sales on the night at the ground.

Tickets, which are £5 for adults and £3 for under-18s and concessions, can still be bought from Boston United’s website. The ground will also be cashless on the night, so cards will be needed for refreshments.