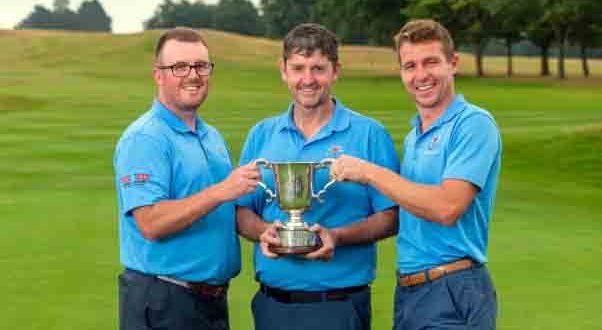 Spalding Golf Club’s three-man team stormed to a stunning triumph in the English Champion Club event – and will now aim to enjoy more success when they go forward to the European equivalent in Portugal next month.

After two days of excellent competition at Knole Park Golf Club in Kent, the Spalding trio of Simon Richardson, James Crampton and Darryn Lloyd claimed a four-shot victory over the field.

Their three-man total gross score over two rounds was a mightily impressive seven under par and earned them the glory ahead of 30 rival club sides from all across England.

It completes a remarkable treble for the Surfleet-based club, who have also won the Bramley Trophy and Elsham Trophy this year.

Indeed, the band of more than 20 supporters who made the long trek to Kent witnessed the biggest achievement in the club’s 114 year history.

The team qualified to represent Lincolnshire back in June when the combined efforts of Richardson and Crampton at the Lincolnshire Amateur were the best two scores.

But, the star man over the weekend at Kent for Spalding was undoubtedly Lloyd.

The South African-born golfer shot rounds of 66 and 65 to not only help his team, but also claim the prize for leading individual on a total of nine under par, four shots clear of Hollinwell’s Jack Sallis.

The secret to Spalding’s success, though, was their ability to remain calm under the pressure and play as a team.

Lincolnshire men’s county champion Richardson shot rounds of 70 and 69. Meanwhile Crampton, England Golf’s director of championships, enjoyed a rare weekend as a competitor rather than an official to card rounds of 73 and 70.

The reward for Spalding is a trip to represent England at the European Club Trophy staged at Troia Golf in Portugal between October 21-23.

Lloyd admitted: “It’s a great honour to win this on behalf of our club.

“It’s a difficult event to win as you need all three players in the team to play to a good level and that’s what we managed to achieve.

“At one stage in the final round we were leading by seven shots – a few holes later that lead was down to two.

“We were aware it could turn very quickly but it’s great that we came through with the win.

“Now we have the European event to look forward to and if we can take this form over to Portugal we will hope to compete there as well.

“On a personal level, I was pleased with my performance and in fact left a couple out there today by not making birdie on two of the par fives.

“But it was all about the team and it’s been a great couple of days.”

Over the course of the 36 holes, the Spalding team managed two eagles and 24 birdies while keeping the bogeys or worse to an absolute minimum.

Richardson, Lloyd and Crampton will now hope to follow the example of the last winners of the English Champion Club – City of Newcastle – who lifted the national title in 2019 and then went on to add the European version to their list of honours.

Behind Spalding, first round leaders, Cosby Golf Club, represented by James Billingham, Luke Burrows and Coby Blue Cartwright, finished in second place with a combined tally of three under par.

Derbyshire’s Kedleston Park – represented by Nick Newbold, Ryan Wesselingh and Paul Tatlow – were third after carding an aggregate score of +4.