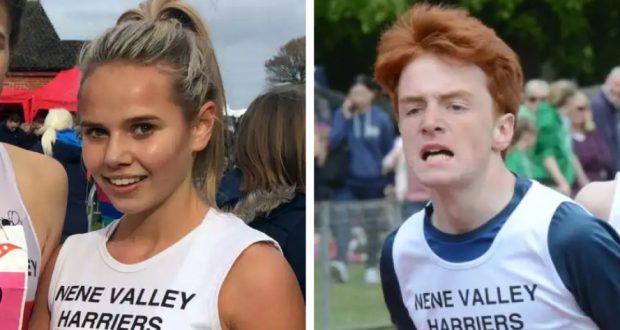 TOP RUNS: Amber Park was third, while Owen Wilkinson was a runaway winner.

The talented pair provided the icing on the cake to a fine display of distance running from Harriers athletes on a challenging Wicksteed Park course.

In a textbook display of front running, Peel won the under-17 girls’ race by nearly 200 metres with a 17.44mins clocking on the 5km circuit.

After just two fixtures of the four race series, the Nene Valley girls are looking well set to be this season’s champions.

The under-17 boys’ race was a closer affair but Wilkinson came good, covering the 6km course in 21.05mins to win by five seconds.

Nene Valley won the under-11 girls’ 2km race and sit proudly at the top of the table. Evie Hemmings and Alexandra Braid finished third and fourth, clocking 7.28mins and 7.37mins respectively.

Phoebe Reeves, in 20th position, was the third scorer for the youngsters.

Nene Valley’s under-11 boys took third spot, with Noah Fell leading the way in 11th position with a time of 7.45mins over the 2km circuit.

The under-15 boys finished third, with Joseph Reindel in sixth and Dylan Tomaselli seventh. Reindel covered the 5km course in 16.47mins, with his team-mate two seconds behind.

Jack Bull was Nene Valley’s first under-13 Boys finisher in 14th. The team finished fourth on the day and are currently sixth in the league.

Meanwhile, Chelsie Bole took eighth place in the under-15 girls’ 3km. Bole went round in 13.44mins and was well supported by 14th-placed Ellie Rainbow and by Lottie Hemmings, who finished four places further back.

The girls were third, but are holding down second place in the league table.

There were two top class performances in the senior races, with Alex Hampson fourth man home while Jordan Foster was fifth lady.

Hampson galloped round the 10km course in 33.00mins, with Lee Harthill squeezing into the top 50, coming home 48th in 36.28mins. The senior men were eighth out of 22 teams.

This is Foster’s first serious season of cross country, but she has taken to it like a duck to water. She went round the 6km course in 24.01mins.

The ladies’ race was run during a torrential downpour which interrupted an otherwise sunny afternoon. Ellie Piccaver was the second Harrier home finishing 39th.

The league includes many of the top London clubs, and Kempson had a great run finishing fourth on the Wimbledon Common course.

After two races it’s a Nene Valley one-two at the top, with Sarah Cameron leading from Dylan Tomaselli.