Sutton’s first game back in the top tier of South Lincs and Border League ended in heavy defeat at the hands of the title contenders Boston at the Mayflower on Saturday.

Promoted Sutton were made to bat first in the Division One clash – and lost Phil Barnes (3) early on.

However, Chris Booth and Adam Wright built a solid partnership as they saw off the new ball attack.

Wright then fell for 19, with Paul Edgeller (0) going quickly after. Sutton looked as though they would begin to collapse as Steve Skoulding (3), Matt Bull (2) and James Booth (0) all fell to leave the away side struggling at 87-7.

It then became imperative that Sutton reached the 100 mark in order to pick up a batting point – so It was left to Jimmy Wright and Barry Stanway to edge them into three figures.

Both looked composed at the crease, willing to be patient in waiting for scoring opportunities. Boston were frustrated as Sutton reached a competitive 154-7 from their 45 overs with Wright finishing on (40 not out) and Stanway making 28.

In reply, Sutton needed early wickets to put the pressure on – and did find an early breakthrough through Edgeller, but Boston always looked in complete control.

Jimmy Wright then picked up a second wicket, but the final result was never in danger of changing as Boston romped home with more than 20 overs to spare.

It doesn’t get any easier for Sutton as they take on another main title contender at Paradise Field in the shape of Grantham on Saturday (1pm).

It was business as usual for Sutton 2nd as they romped to victory in this Division Two clash at Paradise Field on Saturday.

Grantham regrouped until skipper Rob Simpson (6-21) took over at the Shadow End. With Morris continuing with his monotonous delivery of line and length and Simpson bowling in a different language to the batsmen, the away side struggled and eventually were all out for 75.

Paul Johnson (32) was their top scorer, with Matthew Wing (26) the only other player to make double figures.
The Sutton reply saw veteran Andy Wright and 15-year-old Jack Keeble opening.

Wright looked like he had never been away and, ably assisted by Keeble (17) and Ben Shore (7no), soon took Sutton to victory with a brilliant 40 not out.

His knock included six fours, while Keeble found the rope three times himself.

Sutton’s second string visit Blankney on Saturday (1pm) as they bid to make it back-to-back wins. 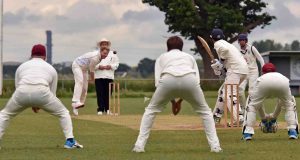