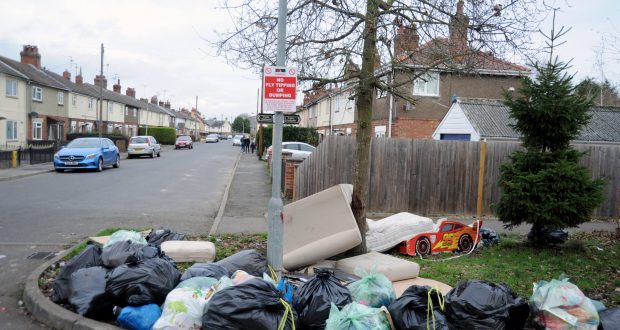 An example of one such collection point on Ayscoughfee

After reports of misuse of waste collection points, people who live on private drives could soon request bin lorries be allowed to collect from outside their homes.

But the roads would have to meet specific guidelines and its owners enter a legal agreement with South Holland District Council.

The authority says its waste collection vehicles have not collected from private roads over concerns with regards insurance and safety, a meeting of its Performance Monitoring Panel heard last week.

Instead, residents had to leave their waste at set collection points on an adopted road maintained by Lincolnshire County Council.

“This can create unsightly accumulation of waste, days before the collection and can attract fly tipping.

“We understand the frustrations of those that have collection points that are misused.

“We’ve considered how we can address them as a collection service and a council as a whole.”

While collecting from private roads is now district council policy, road owners can apply for theirs to be exempt, with the first of such set to be Northons Lane in Holbeach.

Road owners would need to show the road meets guidelines set by the district council and enter into a legal agreement with it.

Ms Pain said of Northons Lane: “It was agreed as the best option and supports development of a number of new homes in Holbeach.

“No two private roads are the same that’s why we’re looking at an exhaustive list for the potential criteria as to whether a private road can be exempt from a policy such as Northons Lane. We believe this puts us in a better position to monitor present and new private roads as a collection service.”

Councillors on the panel urged more be done on the planning side of things.

“Some of these collection points have been allowed to be too close to people’s doors and windows and I hope those on planning will try and resist that in the future.

“It’s alright us saying the management company owns them but they might be miles away.

“They don’t send someone round to clear up after the wagon’s been and all the grunge, slime and filth is left at the collection point.

“Who cleans it up? It’s usually the person who lives nearest to it who can smell it from their house.

“I don’t think we need as many of these small roads. They’re not for the benefit of the council or betterment of residents. It’s financial and gains for the developer who can fit more houses in.

“I hope we learn from some of the mistakes we’ve made in the past.”

She continued: “We need a better service.”

The panel’s chair Bryan Allcock added: “The people who live in private drive houses pay the same rates as everybody else, but they don’t get the same service.

“I appreciate the reasons why, and there’s risks associated with heavy goods vehicles going down private roads.

“I’m sure other vehicles will go down those roads, but rest assured the one that goes most regularly will be the one that’s pointed at and the easiest sort of a claim will be on the district council.”

He continued: “In my own patch we have a number of areas where people put their bags out days before the waste is collected and that needs addressing.

“We have areas where people are beginning to get the habit of dropping bags off miles away from where they live. If someone persists in putting their rubbish out days before we should take some action. We used to do but we don’t seem to do at the moment.”