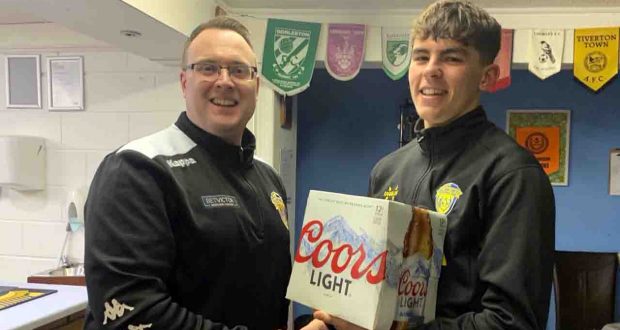 Two defensive lapses proved costly for Spalding United as they lost 2-0 against table-topping Leek Town at the Sir Halley Stewart Field on Saturday.

The Staffordshire visitors, beaten only once in BetVictor NPL South East Division this season, moved five points clear at the top with goals from Oliver Harrison (20) and Tim Grice (35) at the Sir Halley Stewart Playing Field.

Leek were always going to be a tough nut to crack, but the Tulips pushed them all of the way with another tenacious display in front of a crowd of 190 – their third highest attendance of the campaign.

Both goals in the closely contested encounter came in the first half, the first after 20 minutes when towering centre half Harrison arrived in the area to slam the ball home following a corner kick from six yards.

Interim Spalding manager Lewis Thorogood said: “I feel we have come a long way in a short space of time and competed with the league leaders.

“The difference was two individual and collective errors to concede two sloppy goals. Leek are top because they are clinical, assertive and stick to their plan, no matter what.

“We must learn from this and develop that into our game to be recognised as a top side in the league.

“That said, I cannot question the workrate of the players in the main.”

Leek were predominately the more lively as an attacking force, moving swiftly with good movement. But the Tulips were always fully involved with skipper Lewis Brownhill a constant inspiration with his never-say-die approach and receiving excellent backing from his troops.

Kegan Everington, busy as ever in the midfield, set up an early scoring opportunity with an excellent through ball to find Jack Smith in space who, after making some ground, fired wide from 12 yards.

At the other end, Leek talisman Grice missed the target by inches.

Play was constantly from end to end before the deadlock was broken by Harrison and shortly afterwards only an excellent blocking save by Smith prevented Lewis Short from extending the lead.

But Grice’s effort on 35 minutes left the Tulips with a mountain to climb.

However, the hosts never gave up the chase. The second half was intense, with Spalding battling hard in all areas to thwart their lively opponents with some excellent defending and effective work from the midfield through to the forward area.

Young Lincoln City academy loanee Gianluca Bucci was one of those eager to make his mark – and match sponsors ‘Spalding Stewards’ duly named him as their man of the match.

The closing stages saw Josh Spencer just inches away from making contact with Everington’s free-kick near a far post of the Leek goal, as the game finished 2-0 in the visitors’ favour.

The loss sees Spalding drop down to tenth in the table, some seven points off the play-off places.