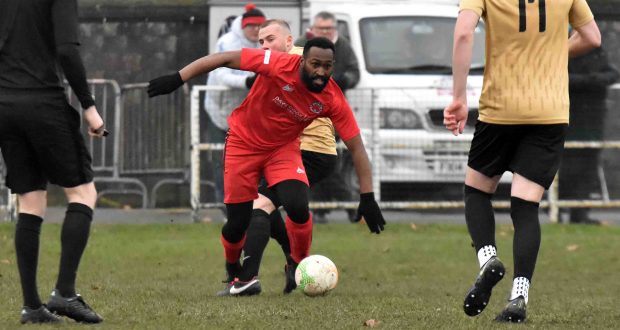 Boss Lewis Thorogood struggled to hide his disappointment after seeing his Pinchbeck United side beaten 2-1 at home by Eastwood on Saturday.

Kyle Wrenn gave the visitors a 1-0 lead at the break with a goal on 41 minutes, before they doubled their advantage through Louis Czerwak on the hour at the Sir Halley Stewart Playing Field.

Pat Kacirek pulled one back for the Knights 11 minutes from time, but they couldn’t find a leveller despite a late Harry Peasgood strike rattling the woodwork.

Thorogood said: “It’s very disappointing to get nothing from the game.

“To be honest, the game had 0-0 written all over it in the first half. There wasn’t much quality, but I felt we had more possession.

“For them to score from a set-piece just before half time was a kick in the teeth.

“Credit to the lads, they went out in the second half and showed some desire. We pinned them back and had all of the possession.

“But, from what felt like their only attack, they got a second from a corner and I just couldn’t believe we were 2-0 down.

“We showed some character and got a goal back, though. I think we’d have equalised if we had ten more minutes, but it’s a missed opportunity for us.”

Thorogood handed a start to legendary local striker Avi Viera, who is on loan at the Knights from higher-graded Wisbech Town.

The boss felt that he “grew into the game as it went on” and is hopeful that he’ll be able to call upon the former Peterborough Sports striker for a few more games.