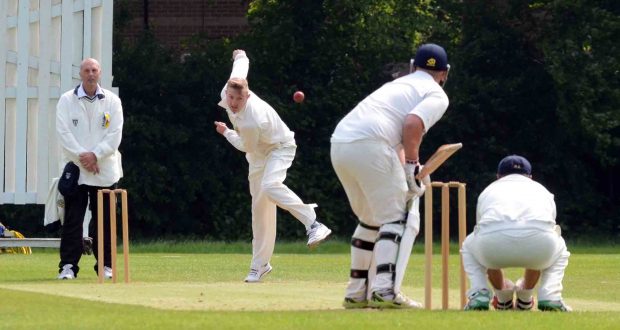 CONFIDENT: Jonathan Miles (left) is eyeing up another win. Photo by JAKE WHITELEY

Miles: Spalding Town ‘on-target for title’ ahead of derby duel with Billingborough

Skipper Jonathan Miles admits that Spalding Town couldn’t really have made a better start to their bid to make it back-to-back South Lincs and Border League Premier Division titles.

Table-topping Town made it eight wins from 11 games (only one defeat) last weekend with a comprehensive victory at Freiston (see page 38) and sit two points clear or rivals Bourne 2nd at the summit.

This Saturday sees the leaders back on home soil against old foes Billingborough at Spalding Grammar School (1pm).

The two clubs have shared a notable rivalry over the past few seasons, but captain Miles admits that things have moved on and isn’t expecting anything more than a typical derby tussle.

“We’ve only really had one blip so far this season,” admitted the Spalding skipper. “Other than that, things couldn’t really have gone much better.

“I think the top three – ourselves, Bourne 2nd and Woodhall Spa 2nd – have opened up a bit of a gap at the top and it’s going to be interesting.

“We’re feeling confident of achieving our target of winning the league and getting promoted.

“It’s a case of so far, so good really. We’re not really looking at the opposition, it’s more a case of maintaining what we’ve been doing and focusing on ourselves.

“If we play to our best, we know that we have a good chance of winning any game this season.

“Billingborough will be another tough one. They’ve really picked up in recent weeks and have got themselves out of the bottom two.

“It’s true that the clash has been a feisty one in recent years, but they’ve pretty much changed their entire team.

“So, I’m not really expecting there to be any more bad blood than usual.”

Miles, who was very happy with the way his side performed at fourth-placed Freiston last weekend, admits that he does have something of a selection headache over the next few weeks with player unavailability quite up and down.

But the all-rounder is backing what he calls a “strong squad” to keep Spalding in pole position in the title race.

“It was a very warm day, so we were fortunate to win the toss and able to bat first.

“We did well with the bat and the bowlers were brilliant too.

“The situation squad-wise isn’t ideal in the next few weeks – we’ve got quite a few players missing.

“But we’re lucky that we’ve got a squad of 15 players that can all step in whenever they are required to.

“Whoever comes in is more than capable and I have faith in all of the squad.”

Opponents Billingborough have won two of their last five, although they have suffered back-to-back defeats in recent weeks.

Spalding, meanwhile, haven’t lost since the shock three-wicket defeat at the hands of Grantham 2nd on May 25.

Elsewhere in the top flight, Long Sutton also have a derby of sorts when they visit Boston 2nd on Saturday (1pm).

Both sides have been struggling for form in their last five games, but Sutton could break into the top four by securing a big win and hoping that the other results go their way.