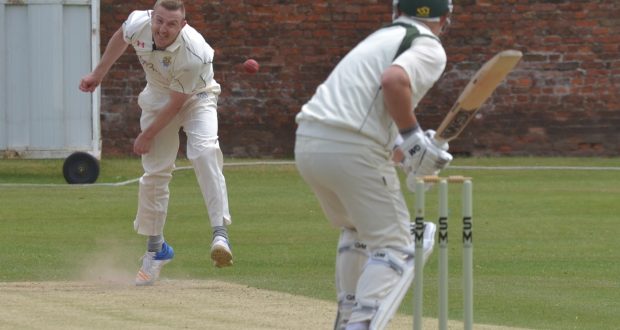 Miles, who is enjoying leading the team for the first time, is hoping for more of the same on Saturday when Boston 2nd make the short trip to Spalding Grammar School (1pm).

He said: “We’ve had a perfect start to the season, really. We’ve had a couple of tough games, too

“It’s obviously too early to start talking about winning the title, but things are looking good at the moment.

“We’ve got lots of young players in the team and you have to expect that they’ll be up and down throughout the season.

“So it’ll be up to the experienced players to keep our levels high as the season goes on.

“What has really pleased me batting-wise is that, at some stage this season, the experienced players have stepped up and made big scores for us. It’s not just been one player each week.

“From my point of view, I’ve really enjoyed being captain of this team. It’s been a real team effort so far this season and we’ve played some good cricket.

“The young lads are all keen to improve and the more experienced players are all taking responsibility out on the field.”

Miles admits that last weekend’s 112-run win over Sutton wasn’t the most enjoyable of fixtures, given that their rivals showed no interest in chasing down their target of 245.

The nature of the win ended Spalding’s run of taking maximum points in each of their games, but the skipper isn’t overly bothered by the stat. Instead, he’s focused on seeing his side out-perform rivals Boston 2nd in the field this weekend.

“It was difficult going against Sutton if I’m honest,” added Miles. “They weren’t really interested in chasing the score down.

“I think they had a few bonus points on their mind, which is their prerogative.

“It was a good pitch for batting and we were down to just one seamer at one point and the slow bowlers were quite easy for them to block.

“We wanted 20 points, but 17 is fine in the grand scheme of things. We move onto Boston, which will be difficult as always. The local games are always well contested.

“We’ve been consistently great in the field so far this season and all I’ve said to the players is that we need to keep out-fielding the opposition. If we do that, I’d back us to win again.”