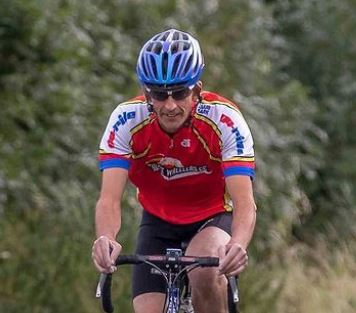 The loss of a best friend has prompted a South Holland cyclist to embark on a marathon ride to raise money.

Chris Peel is aiming to complete 100 miles a day for seven consecutive days and has been training hard for the event.

His best friend Stephen Fennelow (pictured left) died from lung cancer four years ago but Chris has been recently inspired by the actions of rugby league star Kevin Sinfield.

Now retired from Leeds Rhinos, Kevin ran seven marathons in seven days to raise money for the Motor Neurone Disease Association as his best friend and club mate Rob Burrow was diagnosed with the condition.

“Although I’m not new to cycling, this is more than I have ever done before. I do question myself about whether this is a silly idea at my age. But I am so fortunate,” he said.

“Steve was kind, generous, hardworking and funny. His strength of character was inspiring and I talk to him more now than I did before he was taken. I carry the heavy regret of not doing more together,” he said.

The pair met when they worked together at a carpentry and cabinet makers.

“He was born with one hand but that didn’t stop him. He first got cancer in his good arm and then re-trained as a taxi driver in Wisbech. He had a massive work ethic,” said Chris.

“His strength of character was inspiring.”

Destinations during the week-long cycle challenge include Skegness, Hunstanton, Lincoln and Rutland Water. Chris will also cycle to Chatteris in Cambridgeshire to see Steve’s dad on the date he would have celebrated a birthday – June 7.

“I am going to be exhausted. I have cycled 100 miles for four days in Northern Ireland, but I’m a bit older now,” said Chris, of St Andrews Road, Spalding.

“Magical moments will be created. Should I falter, my loving wife Kate will be out there, roadside and can lift my spirits,” he said.

The couple’s daughters Molly (18) and Ellie (16) are also supporting Chris.

He is raising money for Cancer Research and his details are here.