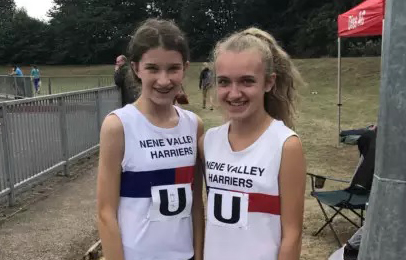 WHAT A RUN: Molly Peel (left) starred for Nene Valley.

Molly Peel stole the show for Nene Valley Harriers in their North Midlands Cross Country League opener at Derby as she won the under-17 girls’ race by 44 seconds.

Katie Tasker (sixth) and seventh-placed Amber Park, along with Peel’s fine result, helped the club to an overall team win.

It was a good day for the Nene Valley girls, who also won the under-11 age group.

The under-15 girls also enjoyed a productive afternoon as they finished second, with sixth-placed Chelsie Bole, Flo Brill (10th) and Ellie Rainbow (who came home 14th) all running well.

For the boys, it was more about solid individual performances with Noah Fell leading the Nene Valley under-11s home in 16th position. Felix Bowling was 18th for the under-13s and there was a fine run from Sam Hughes, who was the fourth under-15. Archie Rainbow finished tenth for the under-17 boys, too.

The standout performers were Alex Hampson, who finished ninth for Nene Valley as he covered the 10k course in 34.00mins, and eighth-placed Grace Mullins (Peterborough AC) in the ladies’ race.

Mullins was supported by 16th-placed Sarah Caskey and Danielle Hunt in 23rd.

The Jones family enjoyed a day out, with husband Brian running for the senior men and daughters Esme and Alice making their club debuts in the junior races