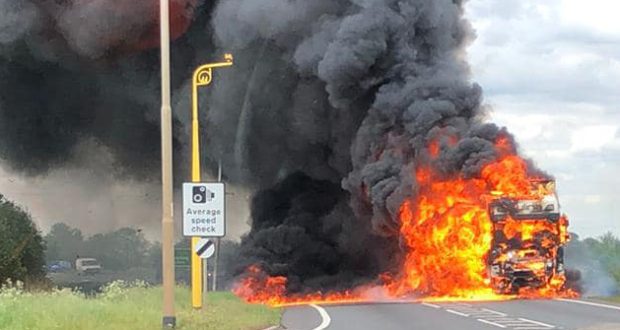 The lorry shortly after bursting into flames on the A16 picture by Craig Norbury.

Lorry bursts into flames on A16 near Crowland

A lorry has burst into flames on the A16 in Crowland.

Eyewitnesses said they heard a “loud bang” before black smoke was seen coming from the vehicle at around 4.30pm on Thursday, May 12.

The incident occurred close to the junction with Peterborough Road.

A spokesman for Lincolnshire Fire and Rescue said that four fire crews are in attendance from Crowland, Spalding and Stanground and Dogsthorpe based in Cambridgeshire.

A spokesman for Lincolnshire Police, said: “The road will be closed whilst the fire is dealt with and any damage to the road is assessed.”

No casualties were reported, the fire service said in an update on Friday morning.