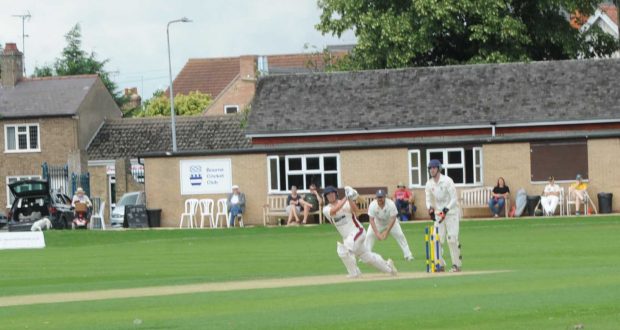 Long Sutton Cricket Club upset league leaders Bourne 2nd at the weekend as they continue to flourish in the South Lincs and Border League Premier Division.

Despite losing several players over the winter following their first season back at this level they’re again comfortably in mid-table this time around.

Three consecutive defeats had checked their momentum but they bounced back in style on Saturday with a dramatic five-run win over the league leaders.

Bourne needed just six runs with two wickets and plenty of overs in hand in the match.

But Sutton were able to claim a five run win with captain Dan Oldfield bowling the last batsman.

It was a good match for Oldfield who opened the batting scoring 49 in an opening partnership of 68 with Luke Barnes.

Barry Stanway (44) provided an excellent innings down the order and others chipped in as Sutton posted 163 all out.
Australian Beau Newman claimed three wickets, Oldfield two, Angus Bell and Adam Whittacker one as Bourne were bowled out for 158 in the 39th out.

“The performances in the two weeks before that were particularly disappointing and we needed to get out and perform,” said captain Oldfield.

“It showed what we can do and that’s the level we can play to.”

Long Sutton’s Sunday side are also in fine form and seemingly cruising to the Rutland League Division Four East title after 10 wins out of 10 including a 10 wicket win at the weekend.

It’s been an impressive showing throughout especially given Sutton’s youngsters have come to the fore replacing the likes of last year’s top performer with the ball, Will Naylor who made the move to Spalding Town.

Dan continued: “We’ve been looking to just grow from last season which was our first back in the Premier Division.

“It was a fairly decent season last time out and we’ve had some decent results.

“We lost a few to other teams over the winter but Australian Beau Norman has come in and been excellent and the young players who have come in have stepped up.

“We’re all looking to improve as a club and as a team.

“We’re not looking to win the league and there’s no desperation to get promoted, we just want to keep improving.”

*Long Sutton 2nd’s South Lincs and Border Division One match with Sleaford 3rd was abandoned due to thunderstorms.

Sleaford had reached 190-5 from 43 overs with Jake Henderson scoring 75 and Kieran Harbron 52.
For Sutton James Baker (3-31) took late wickets while Ed Munson claimed 1-15 from his 10 overs before the rain came.

*Long Sutton’s Sunday side are a perfect 10 after thrashing Deeping 2nd by 10 wickets in Rutland League Division Four East.

Dan Oldfield (30 not out) and Ethan English (27 not out) made short work of the target for a 10 wicket and 10th consecutive win.