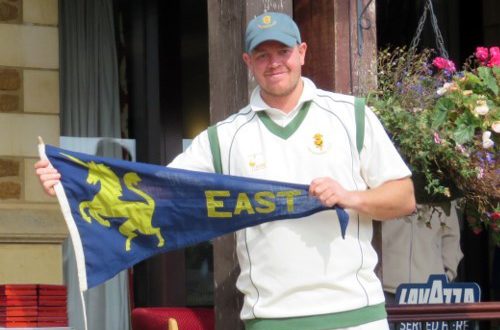 Lincolnshire were unable to end Berkshire’s recent dominance of the Unicorns Championship after suffering a heavy defeat in the play-off final.

Eastern Division champions Lincs had high hopes of ending Berkshire’s winning streak in the league, but slipped to an innings and 32-run defeat at Banbury.

It was the third time in as many seasons that the duo have met in the showpiece final, but on each occasion the result has been the same.

In overcast and bowler-friendly conditions, Berkshire won the toss and put Lincolnshire in to bat.

Within the first 16 overs Lincs were on the back foot, losing four wickets for 35 runs and were further reduced to 84-6.

Stands of 41 between Carl Wilson and Nick Keast and of 52 between Keast and Curtis Free brought some respectability to the score, though, as they were finally dismissed for 198 in the 61st over.

Keast (42) was Lincolnshire’s top scorer, while Alex Russell (5-57) was Berkshire’s most successful bowler.

Berkshire commenced their innings in fine style, putting on 42 for their first wicket in 11 overs before Waqas Hussain was dismissed for 27.

Euan Woods joined Jack Davies and they took the total to 144-1 before bad light brought an early end to the day’s play.

The start of play on day two was delayed by an hour due to wet conditions.

Thereafter Berkshire dominated the day’s play, with Woods and Davies adding 139 for the second wicket before Davies fell to Curtis Free for 73.

Woods and Richard Morris took the Berkshire total past that of Lincolnshire’s, adding 68 for the third wicket. Woods finally fell to Curtis Free for a fine 98.

Berkshire’s run rate declined somewhat at this stage, but they soon picked up the momentum again as they came towards the end of their allotted 90 overs, finally finishing on 405-7.

Free, with 4-91, was Lincolnshire’s most successful bowler.

With a deficit of 207, Lincolnshire now faced an uphill task – and with 36 overs remaining on day two, they needed to bat with great concentration and care.

Joe Kendall and Jack Timby gave them a sound start, putting on 61 for the first wicket before Kendall was dismissed for 26.

A further three wickets fell before the close of play, as the players left the field with Lincolnshire on 124-4, still 83 runs behind.

On the morning of day three, Lincolnshire’s resistance did not last long as wickets fell at regular intervals.

Carl Wilson was the last man out – the fifth lbw of the innings. Lincolnshire’s total of 175 left Berkshire victorious by an innings and 32 runs, but they can be proud of their efforts over the season.