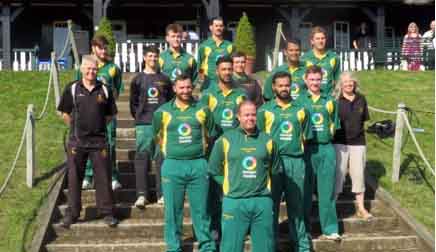 PICTURESQUE VENUE: Lincolnshire County Cricket Club are pictured at Wormsley ahead of their Unicorns T20 trophy clash against Dorset. Photo by JOHN VAN-DER-VORD

Lincolnshire CCC’s hopes of adding the Unicorns T20 trophy to their three successive Eastern Division titles were thwarted when they were defeated by 11 runs by Dorset CCC in their semi-final match at the picturesque Wormsley ground.

On winning the toss, Lincolnshire elected to bowl on a very hot morning.

Dorset made a quick start and reached 66 before their second wicket fell, opener Felix Organ dominant with 40. At this stage a total of 160 to 180 looked likely.

Lincolnshire then took control and restricted the Dorset batsmen and they were ultimately all out for 138 in the 20th over.

Louis Kimber, with 4-26 in his four overs, and Azeem Rafiq (3-27) were Lincolnshire’s most successful bowlers.

In reply, Lincolnshire started at a steady rate but were never able to raise the tempo, only hitting seven fours and two sixes in their 20 overs as their innings subsided to 127-8.

Dorset went onto the final to play Hertfordshire, who defeated them by nine wickets in the final.

Lincolnshire’s final match of the season is their three-day Eastern Division fixture against Bedfordshire at Grantham on Sunday (10.30am start).