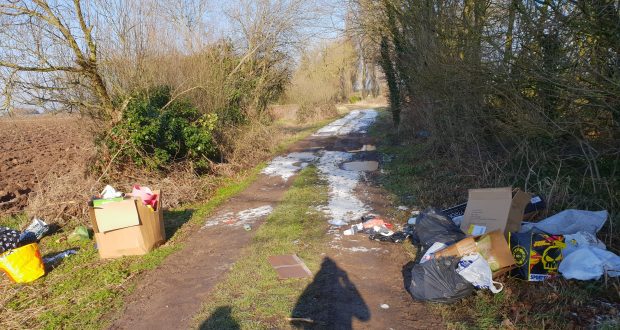 Mr Thackray refers to fly tipping on a large scale as he mentions the illegal disposal of white goods but also less pleasant items.

Over the past six weeks in Holbeach we have suffered the removal of black plastic bin bags the night before collection day which are then taken to an alleyway and set on fire. This leaves a rather nasty mess for SHDC to clear up. These remains are a plastic bag melted in to the Tarmac and various items of household refuse and newspapers which are used to start the fire.

Previous to this we have also had a bag of old clothing, a broken up kitchen cabinet, dog mess that should be cleared up by the owners and only last week two plastic garden chairs.

I must commend SHDC which acts promptly to clear this mess away as it usually covers the width of the alley making it difficult to negotiate with a pushchair or on a mobility scooter.

I hope the illegal disposal of waste highlighted by Mr Thackray is soon attended to by SHDC as this sort of eyesore is also detrimental to the land it is deposited on.

On a different note, your correspondent who suggests we adopt the German practice of each home/business owner clearing the footpath outside their premises has not considered the issue of public liability.

If you were to clear a pavement of snow and someone were to fall on the cleared area, the home owner would probably be held liable and thereby open to being sued by the injured party. It would be far better to leave the path uncleared and leave the council to carry out the clearance. After all they probably have much better liability insurance.

I realise that this may be an unpopular attitude as it is more hazardous for the frail and elderly to walk about in such conditions but people are likely to be more careful on a wet or snowy surface than one cleared of snow.

So until the issue of liability is resolved leaving footpaths covered in snow is probably the best course of action.

LETTERS – When will council reopen?