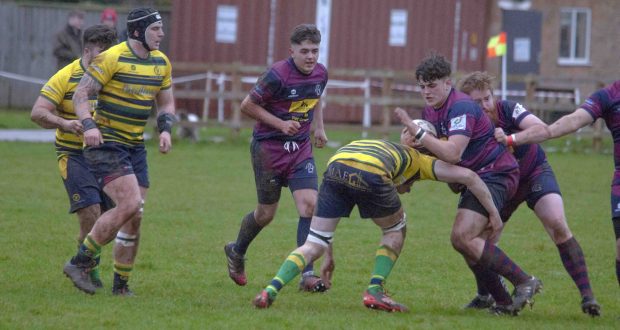 ON THE BALL: Spalding were soundly beaten on Saturday. Photo by ADRIAN SMITH

Spalding RFC kicked off their 2022 fixtures in Midlands Three East (South) with a 26-7 defeat at Huntingdon & District on Saturday as their travel troubles continued.

The defeat leaves Spalding tenth in the table, level with the two sides below them, and still without an away win in the league this season.

Things didn’t look too promising for Town as they travelled down to Huntingdon in heavy rain – but, by the time they took to the pitch, conditions were surprisingly good.

The opening period was very positive for the Elephants, who had the upper hand in the scrum as both teams were having handling problems with a slippery ball.

The home team soon settled, though, and started to use their big forwards to punch holes in Spalding’s defence, again under the leadership of George Brown.

However, from a lineout the home team won possession and established a rolling maul which drove over the line for a converted try after 12 minutes.

Both teams were struggling at the breakdown and penalties were starting to be conceded, but Huntingdon were talking back too much to the referee and several penalties were reversed in Spalding’s favour.

The chance passed though, as two penalty kicks were missed while a yellow card was shown to a Huntingdon player.

Fly-half Conall Mason was also kicking for touch and, with lineout possession secured by Alan Charevicius, Town were unable to take advantage with ambitious offloads resulting in possession lost on too many occasions.

Harry Cole was then yellow-carded and, straight from a missed penalty kick, Huntingdon turned over possession and were immediately under the posts.

So, instead of there being just the one point in the match, Huntingdon crashed over from another effective driving maul following a lineout to give themselves a 19-point advantage at half time.

Spalding resumed play after the break, but their structure seemed to fall apart with Huntingdon taking advantage at the rucks and with growing confidence started to pass the ball along their back, with the back row of Harry Waine and

Will Cole forced to make a number of good defensive tackles.

Frustration was building up in Town’s ranks and Mason was yellow-carded, while Connor Lilburn went off with a shoulder problem.

Then, out of the blue, Spalding suddenly started to play some really good rugby with positive carries and looking for space rather than going down blind alleys.

With just a couple of minutes left, they looked to have scored in the corner, but the referee judged the ball to have been held up.

From Huntingdon’s kick out from under the posts, Spalding regained possession and finally a backs move worked to perfection as full-back George Douglas sailed straight through at pace to score by the posts for Mason to convert.

It was just a consolation for Town, who did not help themselves in this match as they were too often slow to the breakdown and with pace out wide, centre Gav Sharman with his try scoring record hardly received the ball all afternoon along with the two wingers.

Next up for Spalding are seventh-placed Luton at home on Saturday (2pm).