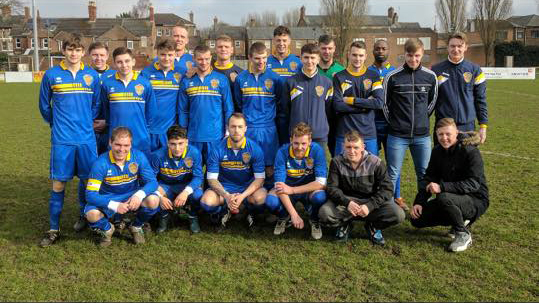 It’s not been the best of seasons for Spalding United Reserves – but they finally had reason to celebrate on Saturday.

The Tulips’ second string, who had gone 21 ChromaSport PDFL Division One games without a win and faced a negative goal difference of more than 100, enjoyed a day to remember at the SirHalley Stewart Playing Field as they thrashed Riverside 11-0.

Rafal Marczewski (3), Hristos Dokov (2), Marcin Minczynski (2), Aidan Doherty (2), Aron John and Tomas Gomes were all on target to give boss James Langford his first win in the job.

The Tulips chief admits that it’s great to finally break the club’s woeful winless streak, but refused to get too carried away ahead of the reverse fixture with Riverside this Saturday (2pm).

Boss Langford said: “I’m so happy we finally got the monkey off our backs now and it’s time we build on the win.

“Our attitude and performance was excellent on Saturday but we must not get carried away as Riverside were not great at all.

“But we now face them away this Saturday and we must approach it with the right effort and attitude as we have big ambitions to continue improving as a squad.

“The lads have been great since day one and deserve all the plaudits for the win.

“Thanks also go to everyone at the club for the support.”

The Tulips’ second string started with intent at the Sir Halley and sharp passing play split the Riverside defence early on, with Doherty and John both converting goals within the first six minutes.

With wind in their sails, the Tulips continued to dominate and further goals from Minczynski (2), Marczewski and another from Doherty followed, before a top class finish Dokov saw the boys in blue go in 7-0 up at half time.

The second half was pretty much the same as the first, with the Tulips dominant in possession.

The pace and strength of Marczewski resulted in him bagging two more goals for himself to get his hat-trick.

There was still time for Dokov to add his second before man-of-the-match Gomes added the final goal from from the penalty spot late on.