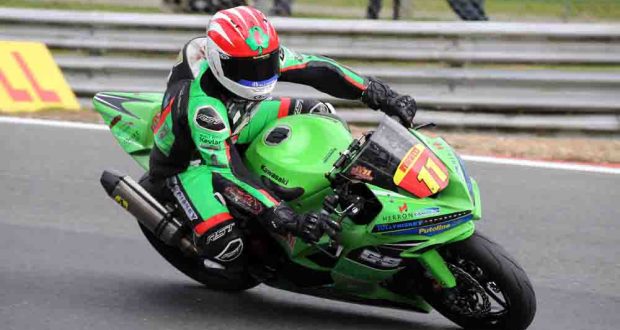 G&S Racing Kawasaki concluded their season with three points finishes at Brands Hatch over the weekend.

However, TJ Toms suffered a penalty for a jump start and was unable to finish his race after receiving a black flag.

Laffins was standing in for the injured Kevin Keyes once again – and was in fine form.

He started his first race from a third-row grid position and fought well to bring the bike home in 13th position.

Laffins then went on to take a strong 11th place in the final race of the series, which was cut short to ten laps. But, if the race had gone full distance, he could have broken into the top ten.

Ward had just one race to contest and rode well during qualifying to secure a ninth row start to his race on Sunday.

He got a good start and began to pick up places throughout the 12 laps to complete the race in 22nd position.

Toms was in excellent form and completed his qualifying in eighth position, his best effort of the season.

But he was a little too eager to get his race under way and was deemed to have jumped the start.

He missed the signal that he was to do a ride through penalty and was subsequently black flagged, which was such a shame after a fantastic start.

Team manager Tom Fisher said: “Sam Laffins made massive steps forward. He built up in every session and completed a superb qualifying and two good races. His lap times were very impressive and he did himself and the team proud.

“Milo Ward had a cracking weekend. In the second free practice session he made personal steps forward and had a better feel for the bike. He had a good pace but just didn’t get the timing quite right to come in for a new tyre during qualifying.

“TJ Toms had a brilliant weekend and showed his potential. He had an excellent qualifying and the strongest weekend of year.

“His lap times were good and although he got beat up at the start he was beginning to come back when he was black flagged.

“He didn’t realise he had jumped the start and didn’t see the board so it was inevitable he would be penalised; unfortunate but it’s all part of the learning curve.”