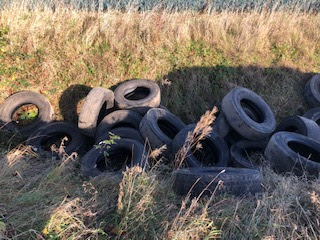 The number of prosecutions over fly-tipping in the area has been branded ’embarrassing’ as a man became the first fined in over two years.

After South Holland District Council made no prosecutions in either the 20/21 or 21/22 financial years Martin Salter, of Wright’s Lane, Sutton Bridge, was earlier this month prosecuted for dumping used tyres in Centenary Way.

It was revealed to a meeting of the authority’s Performance Monitoring Panel last week which also heard the council is looking at an “environmental crime strategy” with its South and East Lincolnshire Councils Partnership, and reiterated it’s looking at bringing in an outside contractor to prosecute fly-tippers.

That’s something one of its partners, Boston Borough Council, has done which prosecuted 25 people for fly-tipping in the six months before January, a Freedom of Information request by the Wombles of Spalding Common revealed.

“We need to crank up the prosecutions because people will think South Holland is a soft touch. We appreciate and understand it’s difficult but we need to find ways around that.”

SHDC’s community safety and enforcement officer Dee Bedford told the panel that the council had seven more possible prosecutions going through the courts and had already changed working practices saying a “triage” system had been introduced.

“This means the officer dealing with the matter no longer has to do a light touch on all reports coming in,” she said. “They can now focus their time on developing the enforcement and investigation.”

When asked what “light-touch” was previously being taken, a council spokesman said: “This refers to the fact that the investigating officer no longer has to review all reports of fly-tipping that come in and make an initial assessment themselves before pursuing cases.

“This work is now triaged within the team before sending the relevant reports over for case investigation, making better use of their time and expertise reviewing reports where evidence is more likely to be available to pursue an investigation.”

The panel was also told the roll out of cameras purchased last year for fly-tipping hot spots was still delayed.

“We’ve done some site visits to make sure which locations would be suitable for the cameras and now we’re just going over the data protection limits to be able to see how we can use it,” Ms Bedford said.

Speaking about the Sutton Bridge prosecution, which came about after a member of the public spotted the incident happening, Coun Gary Taylor, portfolio holder for communities and facilities, said: “I hope that it sends a strong message that we as a council, and our residents, will not put up with fly-tipping in our towns, villages and countryside.

“I would like to thank the residents who reported the incident, and our enforcement team, for their hard work to investigate and bring action against this individual.

“I hope we will have more news soon about further results against those responsible.”