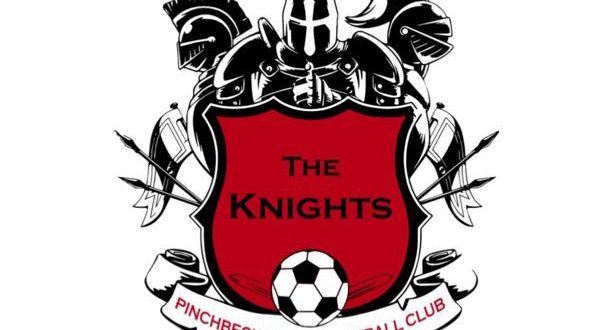 Pinchbeck United concluded their competitive 2020/21 season and the Kingfisher Lighting Cup with a 2-1 defeat to Lutterworth Town on Saturday – and manager Lewis Thorogood says they’ve now started their pre-season.

Jack Wood scored for the Knights to put them 1-0 up but it was five defeats out of five in the competition which sees them finish bottom of the group stage of the six team tournament.

It also means Pinchbeck failed to win a match during the season having been winless at the start of the Uhlsport United Counties League season before it was cancelled.

Thorogood says the competition was a “useful experience”.

“It’s got them to play consistently together,” said the manager who was only appointed just before the lockdown ended the regular season. “It’s given me a better idea of what I can do and what I want moving forward.

“If you’d have asked me three weeks ago I’d have struggled to come up with a lot of positives but the last couple of weeks have been a lot better.

“It’s really helped us move it forward and give us some momentum.

“Both Lutterworth and Oadby are teams who beat us comfortably earlier in the season.

“A point would’ve been a fair result against Oadby and on Saturday we created a number of chances, went 1-0 up shortly after the break and given the chances we created in the second half we could have comfortably been 3-0 up.

“As strange as it sounds though we didn’t know what to do when we were 1-0 up. It doesn’t happen enough.

“That’s a learning point we’ve got to look at, but overall it’s been really good and there’s lots of positives going into the pre-season which, as far as I’m concerned, has already started.”

Indeed Pinchbeck already have two home friendlies in the next few days at their old Knight Street ground.

They take on March Town this Saturday (3pm) and then host Rushden and Diamonds the following Saturday before two weeks’ break.

The UCL Premier Division season is due to kick off on Tuesday and Wednesday, August 3 and 4 with the first round of the FA Cup the following Saturday.

“The season is not too far away. I know a lot of clubs have started training but others, such as Holbeach, Deeping and Bourne, won’t have kicked a ball since October. They’ll be starting from scratch.

“Hopefully we’ll be in a good position going into the next stage of pre-season.”