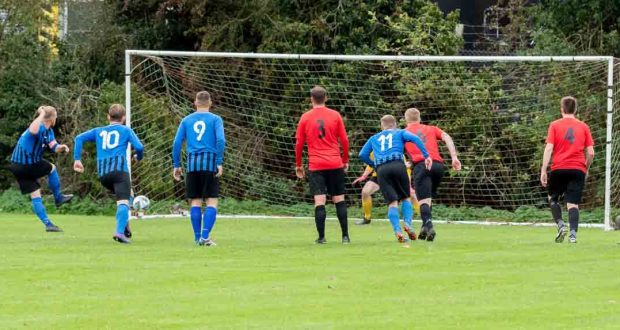 HAT-TRICK HERO: Billy King nets one of his two penalties. All photos courtesy of @RussellDossett www.SportsPictures.Online

Skipper Billy King helped himself to hat-trick as Moulton Harrox eased to a 7-2 victory over hosts Kirton Town in the Lincs Junior Cup on Saturday.

The midfielder netted two first-half penalties as Harrox led 3-1 at the break, before a long-range cross-shot completed his treble at Graves Park.

Joe Townsend (2), Ashley Coddington and sub Dalius Kisla also netted in the convincing win, setting up a trip to Pointon – who knocked out much-fancied Lincoln Moorlands Railway in the shock of the day – in the second round.

The only negative for Kev Nottingham’s side was a nasty injury to striker Marcus Parry, who faces up to four months on the sidelines after suffering a fractured kneecap as he fell awkwardly after vaulting the keeper.

Harrox number two Bobby Patterson was happy with the performance and is pleased that the draw hasn’t served up a lengthy away trip next time around.

“To be honest, I think Kirton showed us a bit too much respect,” said the assistant boss. “We were 3-0 up after half an hour and looked very comfortable.

“But we got a bit lackadaisical and allowed them to get a goal just before the break.

“Credit to the lads, though, we came out and dominated the second half. Dalius Kisla and Dec Earth came on and did very well and we were well worth the big win.

“Obviously it’s a big blow to lose Marcus, he’ll be missed. But now there’s a chance for somebody like Dec to step up and show what he can do.

“We’re pleased with the draw in the next round. Pointon is another Boston League side and it’s not that far to travel. With us not being able to shower or use dressing rooms afterwards, nobody fancied a trip to Scunthorpe in November!”

Next up for Moulton is a return to ChromaSport PDFL Premier Division action as they welcome promoted Eye United to Broad Lane on Saturday (2pm).

Moulton have won all three of their league games so far, while Eye are down in 15th after one win in five.